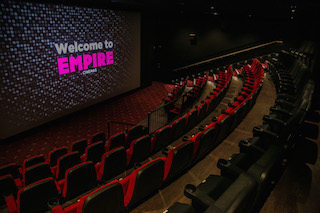 The companies share a number of synergies. Empire was looking to achieve a lower cost for their technical requirements, and CinemaNext wanted to expand their install, planned and reactive maintenance expertise to ensure the highest level of customer service and support in the UK.

“We are delighted with this new partnership with CinemaNext’s London team,” said Justin Ribbons, chief executive of Empire Cinemas. "We have had an in-house engineering team for many years, but with the advent of digital and the technical changes that our industry has, and continues to have, it is more cost effective to have a good technical partner that can carry the cost of training, spare parts inventory, installations and, importantly, supporting our cinemas so that they continue to offer our customers the best possible cinematic experience.”

“The immediate result of this agreement with Empire Cinemas is the significant strengthening of our UK-based operations with the addition of six new highly-skilled and experienced engineers to our local team led by Jerry Murdoch (country manager, CinemaNext UK) and André Mort (now technical director, CinemaNext UK),” said Till Cussmann, senior vice president CinemaNext. “It also increases our business opportunities and will demonstrate our top-notch services and cost benefits for Empire Cinemas and our other existing cinema customers across the UK.”

Empire Cinemas was founded in 2005 following the mergers of Odeon and UCI and Cineworld and UGC. The cinema chain took its name from the iconic Empire Leicester Square, which has been one of London’s most popular cinemas since it played host to the first moving images screened to a UK audience in 1896. It was Empire’s flagship until its sale to Cineworld this past August. Empire Cinemas will open a new 14-screen complex in February 2017 and another 10-screen complex is scheduled to open in early 2018. These new additions to the portfolio will increase Empire locations to 16 cinemas and 151 screens, helping to strengthen their position as the leading independent cinema operator in the UK.