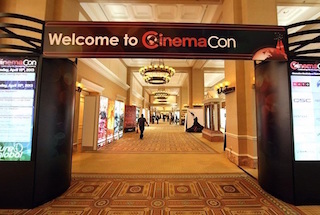 It can be difficult to remember just how upbeat people were that first week in April of 2019, the last time the motion picture industry gathered for a CinemaCon. The domestic box office numbers for 2018 had been incredible. Led by the mega-hit Black Panther, a total of 35 films topped the $100 million mark that year and a 36th, Christopher Robin, fell just short. The box office numbers in 2019 were equally strong; 2020 was off to a strong start as well, and then the COVID-19 virus changed everything. Now, after almost two and a half years, the annual convention of the National Association of Theatre Owners, is set to begin in Caesar’s Palace in Las Vegas.

From August 23-26 motion picture professionals from around the world – at least the ones who feel safe enough to travel – will gather to discuss the latest issues, trends and technologies in motion picture production, distribution, and exhibition. The number one topic, though, is likely to be, where does the business go from here.

This promises to be a smaller and quieter show than in previous years. Which is a shame, because there is a growing feeling of cautious optimism as cinemas around the world slowly begin to bounce back. Still, there are many challenges ahead, some seen and some unseen. Too many unknowns still confront the business, not the least of which is COVID-19, the Delta variant, and possible mutations in the virus yet to come.

NATO is doing all it can to keep attendees safe. Proof of vaccination is a requirement to enter the conference and masks will be required at all indoor events. But, outside the conference itself, it remains unclear what safety precautions will be taken. It doesn’t help that so many U.S. citizens still don’t take the virus seriously.

And, as if coping with a pandemic isn’t enough, exhibitors are faced with a severely limited number of studio films being released and, too often, when they are released, the exclusive window for theatres is shrunk dramatically. The words Disney, Black Widow, Scarlett Johansson, and lawsuit are likely to be spoken many times during this conference. As will the words streaming and day-and-date.

On the plus side, while the number of manufacturers attending the show has been significantly reduced, there promise to be at least a few innovations introduced during the conference.

So, what are we likely to learn from this conference? For me, despite all the chaos and confusion surrounding us, right now feels like a potential watershed moment. Perhaps as much as at any time since the industry finally converted to digital cinema on a global scale more than a decade ago. It’s quite possible that a clearer sense of where the motion picture industry goes from here could begin to emerge from CinemaCon 2021. Four days in August could provide answers.