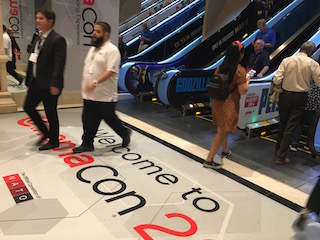 From the earliest days of feature length films until the 1980s, the movie going experience typically happened in a very large theatre with a really big screen. Faced with rising costs and increasing competition from television, exhibitors of that sad era cut their buildings into multi-screen complexes to increase ticket sales and maximize profits on concessions. Today, faced with a different set of economic realities, exhibitors around the world are increasingly responding by creating movie palaces that rival all but the most spectacular theatres of the turn of the last century. One trend at this year’s CinemaCon, which wrapped up last week, was the continuing rise of premium large format theatres. Another trend was the almost comical trashing of Netflix. PLF theatres and Netflix are both here to stay; we’ve been here before.

One hundred years ago the entertainment world was changing, much as it is today. Depending on where a person lived, the entertainment choices were limited to community bands, touring vaudeville and theatre groups, and storefronts that offered short, silent moving pictures for a nickel. If you were lucky, the circus came to town once a year.

As the motion picture business evolved, movies began to tell longer stories and feature recognizable actors. They also became more expensive to make. Savvy showman realized that to cover the costs of production and distribution they would need to charge more for tickets. And to justify higher ticket prices they would need to build theatres that people would deem worthy of the price. To add entertainment value, the films would be accompanied by live music, in many cases large orchestras. 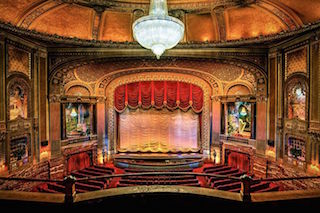 One example was New York's Roxy Theatre. Conceived by film producer Herbert Lubin, the Roxy was known as the Cathedral of the Motion Picture and featured a soaring golden, Spanish-inspired auditorium. Its main lobby was a large columned rotunda called the Grand Foyer, which featured the world's largest oval rug, plus its own pipe organ on the mezzanine. The auditorium seated 5,920. It opened on March 11, 1927 with the silent film The Love of Sunya, produced by and starring Gloria Swanson. The Roxy closed its doors for the last time on March 29, 1960.

Cut to today and the entertainment landscape is changing even more dramatically than it did a century ago. Today’s consumer has a long list of leisure time options including the internet, traditional TV, streaming services such as Amazon and Netflix, cable TV, games, live sporting events, eSports and more.

Despite this, the exhibition industry is coming off a record year. The 2018 worldwide box office topped the $40 billion mark for only the second time ever. This growth was led by the domestic market, which had nearly $12 billion in ticket sales, a seven percent increase over 2017. Much of this is the result of the higher ticket prices that exhibitors can charge for PLF theatres.

An increasing number of exhibitors are opening PLF theatres. Typically the theatres offer more than standard auditoriums to justify the increased ticket price. Typically they have brands such as Ultimate, Extreme, StarX and Xplus. Dolby, which offers the gold standard for PLF theatres, simply uses the brand Dolby Cinema. 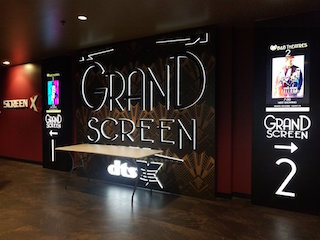 THX announced that later this year it will open the world’s first THX Ultimate Cinema at Regency Westwood Village Theatre in Hollywood. The THX Ultimate Cinema features Cinionic’s dual-Barco 4K laser projection with CGS remastered content exclusively shown at this location. The Regency Westwood Village theatre, which boasts nearly 1400 seats and is home to some of Hollywood’s biggest red-carpet premieres, has also undergone numerous upgrades to the sound system and acoustics. These include an increase in low-frequency power to yield a decrease in distortion and an increase in sound power, as well as the addition of curtains to improve the clarity and accuracy of the immersive multi-dimensional sound system.

Across the country, B&B Theatres announced that it has opened what it calls its Grand Screen in Liberty, Kansas. At four stories tall and seven stories wide, the new B&B Theatres Liberty 12 currently features the largest ScreenX auditorium in the world. The Grand Screen features DTS:X immersive sound, two Christie Digital Cinema projectors for the main Harkness screen, and five Christie projectors for each sidewall. Also just prior to the show, Sony announced that it was entering the PLF market in conjunction with Galaxy Theatres. Located in the Las Vegas Boulevard Mall, the newly built theatre has nine screens and is Galaxy’s first all-laser facility. One auditorium has been designated as a PLF screen. Or has it?

The invitation to the press conference billed it as Sony’s initial PLF effort. However, at the press conference to showcase the new venue Bob Raposo, head of cinema at Sony Electronics, seemed to go out of his way to avoid calling the new room a PLF screen and said neither Sony nor Galaxy has plans to brand it as such. Raposo suggested that PLF was a term that only mattered to exhibitors. He said what matters is how the people who experience it respond. “It’s really about seeing it. We weren’t the first in the market with PLF,” he said. “We’ll have to see where we fit.”

The new room has the largest screen in Las Vegas – 40-feet by 70-feet – comfortable leather seats, two Sony laser projectors and Dolby Atmos sound. For now it’s called Sony Digital Cinema and Galaxy is charging an extra four dollars a ticket to patrons who see movies in it. 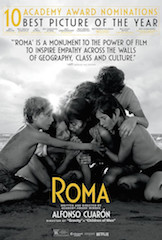 As for Netflix, actress Helen Mirren delighted the crowd at the CinemaCon opening when she said, “I love Netflix, but fuck Netflix.” That, essentially, set the tone for the entire four-day event. At issue is the established three-month window for feature films that exhibitors currently enjoy and Netflix’s reluctance to abide by it. There is also the fact that the Hollywood establishment is still upset about the fact that Netflix produced Alfonso Cuaron’s film Roma, which won this years Oscar for best picture.

Despite that, two industry leaders suggested there was room for cooperation.

In his remarks to CinemaCon attendees, Charles Rivkin, chairman and CEO of the Motion Picture Association of America explained why Netflix was allowed to join the venerable trade group. "At the MPAA, each of our member companies is evolving, too,” he said. “And thus, how we pursue our mission of promoting and protecting creativity is evolving. Recently, that evolution featured Netflix joining the MPAA, adding to our roster of leading global content creators. Here is what I know. We are all stronger advocates for creativity and the entertainment business when we are working together…all of us."

National Association of Theatre Owners CEO and president John Fithian was equally cordial when he spoke. "All we ask is that powerful movies of all genres made by content creators who want their work on the big screen be given the time to reach their full potential in theatres before heading to the home. Theatrical exhibition is the keystone of this industry, and there is no replacement — both artistically and commercially — for the impact of a breakout hit." 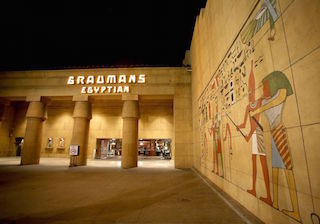 Nothing was decided at CinemaCon. As the reigning giant of the industry Disney was praised effusively and little was made of the fact that Hollywood’s biggest studio is launching its own streaming service later this year. Or the fact that its acquisition of 20th Century Fox only increases its capacity for content creation. Disney assured theatre owners that it will maintain release windows for its big films but left unsaid how it will distribute smaller projects.

Meanwhile, later this year Netflix is set to release Martin Scorsese’s $175 million feature film The Irishman, and there are widespread reports that Scorsese wants a traditional theatrical rollout.

Finally, and in the category of what goes around comes around, this week there are reports that Netflix is negotiating to purchase one of Hollywood’s most famous venues, Grauman’s Egyptian Theatre. On October 18, 1922, the Egyptian played host to the first Hollywood premiere ever held. The movie was Robin Hood starring Douglas Fairbanks. The film reportedly cost a million dollars to make and tickets for the premiere were five dollars. After the premiere, patrons could reserve a seat up to two weeks in advance for daily performances. Evening admission was 75¢, $1 or $1.50. The film was not shown in any other Los Angeles theatre during that year.