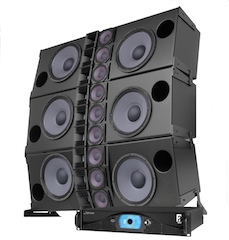 Movie theatres are getting bigger again and exhibitors have learned that audiences are willing to pay for the kind of immersive entertainment that simply can’t be duplicated in the typical home theatre. This trend has only increased the demand that the audio match, or even surpass, the quality of the images on the big screen. Cinema sound has never been bigger or more important. Understanding that, Digital Cinema Report reached out to key manufacturers to learn what developments in sound technology they’ll be highlighting when the exhibition industry gathers next month at CinemaCon 2016 in Las Vegas. In part five of this ongoing series, I spoke with Tom Back, Alcons Audio’s co-founder and managing director to get his perspective.

Tom Back: Alcons Audio is a Dutch manufacturer of professional sound systems (speakers, amplification and integrated processing) for a variety of applications, such as Houses of Worship, performing arts theatres, as well as touring/concerts and AV rental and, of course premium cinemas, extending into home-cinemas.

DCR: What are you highlighting at CinemaCon 2016?

TB: At CinemaCon Alcons will highlight the complete range of our cinema-dedicated C-series sound systems, all featuring Alcons proprietary pro-ribbon transducer technology, with up to 90 percent less distortion and a linear response from the lowest to the highest SPL’s. With this series, a perfect immersive cinema sound experience is available for cinemas from 5 to 5.000 seats. Alcons Audio has a 30-plus year background (and numerous patents) on pro-ribbon technology, resulting in the ability of using the same technology for smallest home cinemas, to even the largest rock concerts. As such, Alcons can be seen as industry leader in this field.

DCR: In your view, what have been the biggest changes in cinema sound in the past decade?

TB: No doubt the most important development has been the DCI standard on cinema sound, a stipulated format with 24-bit resolution, 48 or 96kHz sampling rate and non-compressed sound. Specifically the non-compressed part is essential, so full-resolution with maximum dynamics is available. In our opinion, Alcons pro-ribbon sound systems with an RMS-to-peak dynamic range of 1:16 (traditional compression-driver cinema systems 1:2) and high power handling of up to 2400W are the only systems that truly comply with the DCI standard.

DCR: Do exhibitors in general appreciate the value of sound in movie theatres? Do their patrons?

TB: This is a growing development. Patrons have long recognized the sound quality they have at home should also be available in the cinema. Exhibitors have long denied this, with the general remark that no complaints were received. However, visitors will go simply to another cinema, they know has better sound quality. Widely known are the complaints about sound being too loud, which is mostly the high distortion rate of high quality digital cinema ready sound systems. With the differentiation cinemas are looking for, sound quality and the marketing of the house brand of premium cinema experience rooms is bringing more awareness.

DCR: Can you provide some examples of the responses you’ve heard?

TB: A customer of Alcons has for years invested in improved acoustics but kept their regular (popular) brand of cinema speakers and amps. However, even with their new rooms, they received complaints from their patrons about the sound being too loud, despite playing processor on level 4.5 (instead of 7) already. After calibrated A/B comparisons, they found that the sound on Alcons pro-ribbon systems could be played back on 7, without being too loud, due to the low distortion level of the speakers. [They’ve been an] Alcons customer since then.

DCR: Are cinema sound standards necessary to advance the cause of better quality audio in movie theatres?

TB: Sound standards wouldn’t bring a better sound experience. It’s about new developments, instead of using the 100-plus year old compression driver technology for mid and high frequency reproduction, developed when the silent movie switched to the talkies. And also the awareness of the exhibitor to allocate a proper budget for the sound equipment. Patrons are not easy to satisfy anymore, with phones bringing a better sound than many cinemas. New thinking is required to bring cinema on the next level. Immersive surround standards are a nice feature, but do not raise the quality level per se.