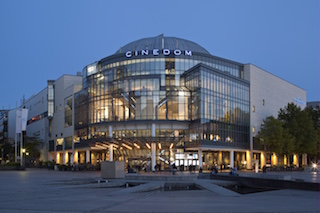 To top it off, a Dolby-Atmos audio system—one of only about 30 in Germany—has been installed to ensure ultrarealistic sound. Thanks to this comprehensive modernization project, the auditorium, which seats 705, now offers a cinematic experience with state-of-the-art visual and acoustic quality.

All components of the new projection and sound systems were planned, supplied and installed by Kinoton Digital Solutions. The 6P (six-primary) laser cinema projection system from Barco, so far the only one installed in Germany, delivers 60,000 lumens onto a 22-meter-wide screen.

To ensure that the sound is on a par with the image quality for a genuinely immersive cinema experience, the Cinedom has also installed one of Germany’s first Dolby-Atmos audio systems. This innovative audio solution abandons the traditional approach involving only a limited number of audio tracks and instead treats every sound source in the film as an audio object that can be freely assigned to any position in the room.

To enable this, the Premiere Auditorium in Cologne has been equipped with a total of 44 high-performance surround speakers. Eighteen speakers, plus two powerful sub-bass surround speakers, are placed in the ceiling. The screen, with its enormous width, has received five four-way stage speaker systems. All of the speakers are fed by digital power amplifiers with total output of about 65,000 watts. The entire system was custom-designed, built, and configured to suit that particlar auditorium. Each surround loudspeaker is individually controlled to function as an indpendent source. The technology supports a maximum of 64 sources. The combination of side-, back- and top-surround loudspeakers makes it possible to position and move all sounds in space to match the 3D onscreen action. The result is a sound environment that moviegoers describe as extremely lifelike and absolutely realistic.

According to Martin Ebert, the managing director of Cinedom Kinobetriebe GmbH, “Dolby Atmos and the 6P premium large-format laser system are a great choice for the Cinedom, because they additionally enhance the overall viewer experience. Together they also give us an unrivalled USP and quality mark, since at the moment we’re the only ones in Germany with this setup.”

Lutz Schmidt, the managing director of Kinoton Digital Solutions, which supplied and installed the equipment, is also thrilled with the results. “The colors and details delivered by the 6P laser projector and the dynamic range of the Atmos system really make a difference,” he said. “Spectators in the Cinedom now enjoy remarkably crystal-clear images and impactful immersive sound.”

The acoustics of the Premiere Auditorium, as a result of its size and structure, posed special challenges for the cinema equipper. The speakers also had to be installed in a way that avoids sound transmission leakage into the auditorium located directly above it. Despite these special requirements, however, Kinoton’s many years of experience enabled it to very quickly rise to the task and complete the modernization project.

Said Ebert: “Design, planning, and delivery went extremely smoothly, thanks to the support of the whole Kinoton team at the installation site.”

The Premiere Auditorium in the Cinedom, which with a total of 14 auditoriums is Germany’s fifth-largest multiplex, reopened on October 15 after only a few weeks of remodeling work.