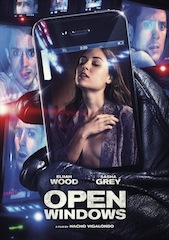 Cinedigm has acquired U.S. distribution rights to Open Windows, directed by Nacho Vigalondo (Time Crimes, ABC’s of Death) and starring Elijah Wood (Maniac, Lord of the Rings, Cooties, Grand Piano, The Hobbit) and Sasha Grey (Would You Rather, The Girlfriend Experience, I Melt with You). The film had its world premiere earlier this month at SXSW. Cinedigm plans a theatrical release in late summer or early fall.

“Nacho is one of the most innovative and visionary filmmakers working today. And his talents are once again on full display in this high-tech, action packed suspense film,” said Vincent Scordino, senior vice president of theatrical releasing for Cinedigm.  “Wonderfully unique and wildly entertaining, we’re thrilled to bring Open Windows to audiences wherever they consume entertainment.”

The film tells the story of Nick, a lucky guy. Tonight, he’ll be having dinner with Jill Goddard, the hottest actress on earth. She’s promoting her latest movie and he’s won the main prize in an online contest. Then he gets a call. Some guy named Chord explains that dinner has been cancelled. And it’s Jill’s fault: she’s a high-maintenance diva, and everybody hates her guts. Chord says he can make up for it. He offers Nick the tools to spy on Jill from his computer for the rest of the night, in a way that no fan could dare dream of. The terrible truth begins to reveal itself. It looks like Chord has set up the whole situation, with Nick playing a part in a much bigger plan...The 21st Century Rear Window.

“I like to think that, in a world in which there are no more virgin territories to explore, making a film that nobody knows exactly what it is going to look like is something very close to an ideal adventure,’ said Vigalondo.  “Open Windows is about observing without being observed; about the fear of being exposed every second of our lives; about the right not to be in front of a camera.”

The deal was negotiated by Kristin Harris, director of acquisitions for Cinedigm, with Creative Artists Agency on behalf of the filmmakers.