Cinépolis, the fourth largest cinema chain in the world, is installing Barco Smart Laser projection in its new Plaza Satélite theatre in Mexico City. Cinépolis is the first movie exhibitor in Mexico to offer laser-illuminated projection in every auditorium in a theatre. 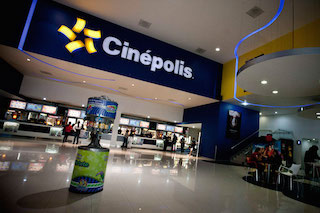 Cinépolis first partnered with Barco in the early 2000s to convert its cinemas to digital projection and has been pioneering its new technologies ever since, becoming the first exhibitor in Latin America to bring laser-illuminated movies and the Barco Escape immersive movie format to moviegoers. It recently expanded this long-standing cinema partnership with Barco to help grow its footprint in Mexico and around the world.

“Barco has always been a wonderful cinema partner, offering the very best technology and service so we can offer a superior moviegoing experience to our guests,” said Gabriel Morales Becker, digital cinema strategy director for Cinépolis. “The operational efficiencies of its Smart Laser projectors – and the elimination of costly lamps and associated maintenance – allow us to upgrade our cinema experience for the lowest possible total cost of ownership.”

Ivan Cannau, vice president for Barco Latin America said, “Cinépolis will enjoy tremendous advantages with their new all-laser multiplex – both from a customer satisfaction and loyalty perspective – and via improvements to their overall business performance resulting from significantly reduced operating expenses and risk across their entire cinema.”