Chuck Schultz Takes on Alligators in the Wild 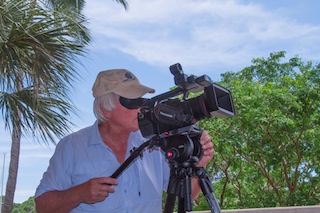 The veteran videographer, based in Fort Lauderdale, Florida, is a longtime Panasonic shooter and previously owned an AJ-HPX500 P2 HD shoulder-mount camera. “I’ve shot successfully with the HPX500 for years, but needed a newer and smaller camcorder to accommodate my documentary work,” said Schultz. “As on the alligator assignment, I need to get in and out in a hurry.”

“When I evaluated available cameras, the PX270 measured up with its broadcast-quality specs, especially the 4:2:2 color space,” he added.

Schultz has spent extensive time testing his new camcorder, and singles out several features. “I like the XLR connectors for external audio, but the studio mic on board is more than adequate for natural sound,” he said. “That’s a key criterion for me, as CBS stipulates unenhanced audio for its nature segments.”

“I love the smoothness of the zoom, and the 22X lens affords me plenty of reach,” he continued. “The camera stops and starts easily, comparable to many of the lenses I’ve worked with on the larger HPX500.”

“Using the HDMI out, I’m able to make a 4:2:2 back-up while making my primary recording on a microP2 card,” Schultz said. “And I really like the back end of the OLED viewfinder: basically, the approach of my eye activates the EVF, which means there’s no waste of battery life.”

“The PX270’s time-lapse performance in especially impressive,” he said. “It’s very simple and quick to set up, and it does a flawless job playing back on a timeline. I’ve always found time-lapse to be a major effort with DSLRs.”

Upcoming projects Schultz will shoot with the PX270 include another nature segment for CBS Sunday Morning that will be shot on location in the Colorado Rockies. He will deploy the PX270 on his full assignment roster; past work shot with the HPX500 encompasses multiple nature segments for CBS, a one-hour shown on the Florida Everglades that aired on NBC, and extensive corporate work for companies such as IBM and Office Depot.