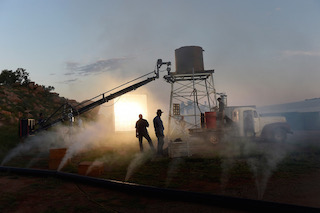 Red Dog: True Blue is the iconic Australian story of friendship and adventure between a young boy and a scrappy one-of-a-kind dog that would grow up to become an Australian legend. The film is the prequel to 2011's Red Dog. Both films were directed by Kriv Stenders, written by Daniel Taplitz, and photographed by Geoffrey Hall. The film features wide desert vistas of Western Australia. It was shot full 2.40 anamorphic using an Alexa XT with a Cooke Anamorphic/i lens package from boutique rental house HyperFocal of Sydney.

“Pilbara is very remote, with nothing like it anywhere else in the world,” said Hall. “It’s not a tourist area but has an incredible beauty and unique look with iron rust soil, but combined with white gum trees and stormy grey skies, the landscape made this a spectacular and really big vista film.” 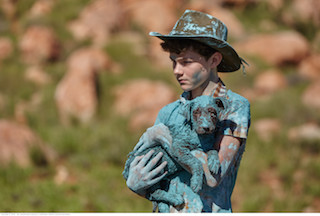 Having shot the original 2011 Red Dog with Cooke 5/i lenses on a Red One, Hall wanted to stay with the same look and quality. “I was hoping that the new Cooke anamorphics would come out in time, and HyperFocal got the lens package a week before principal production was to start,” said Hall. “I did my lens testing to understand their characteristics and saw that consistent look I was hoping for. With its low serial number, this might have been one of the first features shot with the Anamorphic/i lenses.”

Hall and director Stenders have a very collaborative working relationship, having worked together on three other feature films and two television series together.

“We have a very similar visual aesthetic and collaborate very well,” said Hall. “Kriv is also a DP, but directs more these days, but that gives us the opportunity to talk the same language and to understand each other’s needs and desires perfectly.” 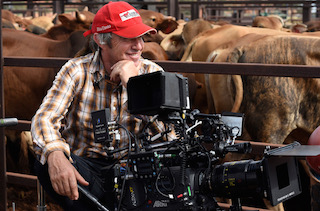 Similar to their experience in 2011, where it hadn’t rained for 16 months at their respective locations, both films experienced rain on the day they arrived — two inches falling in 30 minutes.

“We almost got completely washed out, between the weather and location, it was like déjà vu,” said Hall. “This environment is unique and harsh — the soil and rocks are 96 percent iron, with a magnet being able to pick up the soil. Combine that with lots of large rocky outcrop locations that require four-wheel drive vehicles, and it makes for challenging logistics. Nevertheless, even with the iron dust and heat of the Australian desert, the Cooke Anamorphic/i lenses performed as expected. Cooke’s lenses didn’t let me down on the first film, and I was pretty confident I would have no problems with this film.”

For Red Dog: True Blue, Hall relied on what many DPs call the Cooke Look, with a lens that produces a lower balanced contrast and very minimal blooming. “The Cooke Anamorphic/i lenses are just more complementary to the landscape than any other lens,” he said. “They’re very well matched, with the Cooke 5/i lenses and the Anamorphic/i lenses having similar color rendition and the way they capture focus with a similar roll-off. For me, the very minimal blooming is just something that I like about the Cookes. The way they handle light and images is very much my aesthetic.”

Although Hall had a number of Anamorphic/i lenses available, he primarily shot with the 32mm and 40mm. “I knew I wasn’t going to need a great deal of lenses, as I tend to shoot on one or two lenses, using others for a little punctuation,” said Hall. “I knew going in that I would shoot on the 32 and 40 the majority of the time and was really happy with how they handled the landscape. Moreover, I absolutely did not want the anamorphic blue flare look that other lenses give — I avoid that like the plague. I did not want that clichéd look; I wanted a classic landscape movie look.”

Red Dog: True Blue was released last month in Australia and will appear at the Sundance Film Festival on January 22 and January 28.

The trailer can be seen at www.youtube.com/watch?v=FjbSltqQpFc.