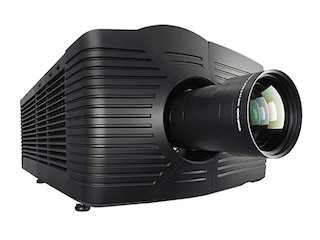 Christie will unveil what it is calling the world’s first 6-primary 4K laser projector in the company’s Innovation Theatre at CinemaCon at Caesars Palace in Las Vegas, March 24-28.

The Christie DLP Cinema projectors use 6-Primary color laser modules and are capable of projecting 3D in 14 foot Lamperts. Earmarked for mass production in early 2015, these projectors will show how 3D light levels, color fidelity, image uniformity, viewing comfort, and a sense of immersion can be vastly improved, especially when combined with advanced color separation technology like Dolby 3D, versus the conventional 3D systems found in cinemas around the world today.

“Christie is the world’s largest manufacturer, installer and servicer of DLP Cinema projection solutions and once again has the show’s largest exhibit area, confirming our leadership position as the go-to innovator for attendees of this pre-eminent gathering of exhibitors and professionals, who are engaged in creating and displaying the best in movies and alternative content,” said Kathryn Cress, vice president, global and corporate marketing, Christie. “Complementing our visual solutions that form the cornerstone of today’s modern theater, and new to this conference, are our Christie Vive Audio sound solution offerings, which deliver a complete, immersive audio experience to any auditorium.”

Cress also noted that Christie’s offerings span the needs of independent exhibitors, which encompass art houses, drive-ins, film festivals and post-production studios, as well as global cinema chains, to leverage cinema and alternative content across all sizes of cinema auditoriums, in 2K, 4K and in 3D, on standard and large-format, premium screens.

Also on display at the event will be the Christie CP2215,  a compact digital cinema projector suited for theaters with screens up to 50 feet (15 meters).

The latest addition to the Christie Solaria series will be in use in the Dolby Labs Milano 1 meeting room at the show, featuring the Christie Vive Audio solution powered by Dolby Atmos sound technology.

Christie will also offer a wide range of options for managing cinema equipment including projection/audio systems and lobby digital signage.

Christie is sponsoring the International Day Luncheon and Awards Presentations on Monday, March 24 and, in concert with RealD will also sponsor the Paramount Opening Night Dinner Party that day. In addition, two Christie Solaria CP4230 DLP Cinema projectors will be in use for selected event screening in the Colosseum.

Finally, Jack Kline, chairman and CEO of all of Christie’s operating companies will receive the 2014 Ken Mason Inter-Society Award from the Inter-Society for the Enhancement of Cinema Presentation at the Inside the Cinema breakfast awards’ ceremony on March 25, in recognition of his outstanding long-term contributions to improving the motion picture experience.