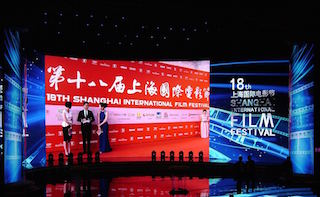 Christie is serving as the exclusive digital projection partner for the Shanghai International Film Festival for the seventh consecutive year. The 18th annual Shanghai International Film Festival will take place from June 13-21. Known as China’s only non-specialized competitive international film festival accredited by the Paris-based Fédération Internationale des Associations de Producteurs de Films, the festival kicked off in style with the screening of veteran Hong Kong director Derek Yee’s new film, I Am Somebody, while China-Russian co-production Ballet in the Flames of War will close the event.

Shot on location at Zhejiang Hengdian World Studios, I Am Somebody is a comedy about the lives of extras working at China's largest film studio. The film is self-financed by Yee and stars unknowns but has numerous star cameos, including renowned celebrities Daniel Wu and Anita Yuen. On the other hand, closing film Ballet in the Flames of War is a romance set during the Second World War. Directed by China’s Yachun Dong and Russia’s Nikita Mikhalkov, the film opened the Chinese Film Festival in Moscow last month.

Lin Yu, vice president, Christie Asia Pacific, said, “Christie is honored to present this premium movie-screening experience to all the guests at this year’s SIFF. With over 85 years of experience in the movie industry, Christie’s digital cinema projectors have achieved illustrious success in the entertainment industry. Every year, the best film professionals around the world gather in Shanghai for this dazzling event and we are delighted to be associated with the SIFF, which is one of the most prominent film festivals in the world.”

Christie is also participating in the China (Shanghai) International Cinema Facilities and Technology Exhibition, which takes place at the Shanghai Convention & Exhibition Center of International Sourcing from June 17-19, 2015. During this event, visitors can check out the comprehensive range of Christie cinema projection and audio solutions, including a live demonstration of the Christie CP2215 DLP digital cinema projector and the cutting-edge Christie Vive Audio™ cinema audio solution, which utilizes ribbon driver speakers and Class D amplifiers.

According to the company, the Christie Solaria Series is the only 4K DLP system able to provide the world’s most brilliant images, the highest level of content security, the easiest adaptability, operation and maintenance. Fully DCI compliant, and built on Christie’s extensive cinema experience, the Christie Solaria Series is ready for the next evolution of digital cinema; capable of displaying premium 4K content or 2D/3D 2K High Frame Rate feature films and alternative content in its original format.