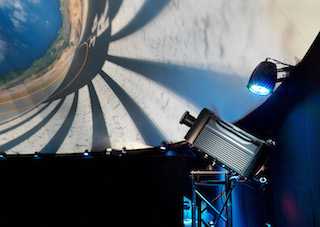 Christie will be providing all the projection for Spain’s first permanent dome to showcase 360° and other immersive environments including a second dome dedicated to virtual reality. Held in Madrid, the Immersive Festival Madrid 2016 is running from May 18-21 at Universidad Complutense de Madrid (UCM) and is free to attend.

The festival is organized by NewMedia Creative Technology Studio, FDDB.ORG (The Fulldome Database) and UCM with the goal of nurturing creative applications of 360° projections, virtual reality and other immersive environments. They have chosen the theme for this year’s festival of Lessons from our past, visualizing our futures: obtaining immersive experiences.

All students, companies and enthusiasts who are already working in or hoping to operate in fulldome, virtual reality or 360° film will find a forum at UCM to share ideas, opinions and know-how on production, diffusion and learning with regards immersive experiences. There will be projections of films in 360°, conferences, panel discussions, workshops, live shows with internationally prestigious producers, VJs and product presentations.

Visitors can attend the event at U-Dome, the university’s 360°, 21-metre diameter dome and the only permanent projection dome in Spain.

The dome is fitted out with six 3DLP technology projectors with 20,000 lumens from the Christie J Series with 1.1:1 HD lens. Using blending and warping capabilities, the projectors will deliver 360-degree projections operating at almost 3K resolution with over 12 million pixels. Besides the U-Dome there will be another dome dedicated purely and exclusively to virtual reality. 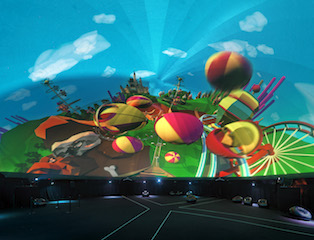 Diego De Anna, CEO of NewMedia explained the importance of Christie’s role as a technology partner in the Immersive Festival. “The festival’s policy is to use the latest state-of-the-art technology for the projections,” he said, “so from the outset we knew that we wanted Christie on our side. This 360° projection system is so complex that only Christie can guarantee us the reliability, sturdiness, brightness and quality we are looking for. And that’s without overlooking the technical support offered by its office in Spain.”

Meanwhile, Marcos Fernández, Christie Director for Spain and Portugal said, “We are delighted that our 3DLP technology projectors are playing a core role at this unique and fascinating festival. The Christie J Series was built to withstand the rigours and stress suffered by rental equipment. There is no other projector in the 20,000 lumens range than can deliver the rich saturated colours of the J Series in such a compact casing”.

The festival has programmed the screening of over 80 fulldome films from 42 countries which will be competing for various awards in five categories: Music Shows; Shorts; Feature Films; Student Projects; and Independent Shows.