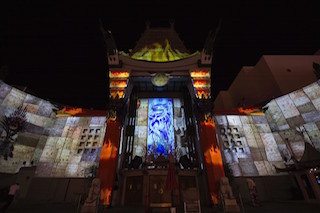 Christie 360 Experiential Studios has delivered the world’s first permanent projection mapping show on a cinema façade at the TCL Chinese Theatre in Hollywood. Designed to enhance the guest experience, the forecourt show was launched before an enthralled audience of Hollywood luminaries, local dignitaries and media. Visuals of forecourt of stars handprints, Chinese dragons, and actual movie clips from memorable films that premiered at the Chinese Theatre emerged onto the theatre’s front entrance, which was digitally transformed into an architectural screen.

“TCL Chinese Theatre has always been a leader in delivering innovation in the cinema experience and we’ve upped the ante with this remarkable addition,” said Alwyn Hight Kushner, president and COO, TCL Chinese Theatres. “Over the next few years our plan is to continue our integration of experiential media as a complement to our core business. The Chinese Theatre is an important landmark in Hollywood and it is crucial to our team that our space stays relevant and continues to be a must-attend for our guests. Christie 360 has shown us a total commitment to our objectives and we are very pleased with the results.”

Denys Lavigne, vice president, Christie 360 said, “The Chinese Theatre is such a fascinating environment. When you combine its rich Hollywood heritage, unique architectural signature and the visionary approach of the management team, you allow for so much opportunity to connect and share with the audience. And that is what Christie 360 is all about, helping our clients and partners fully leverage the experience potential of new digital media platforms for the benefit of their brand and their business. We feel very proud to be part of this fantastic adventure in the entertainment capital of the world. ” 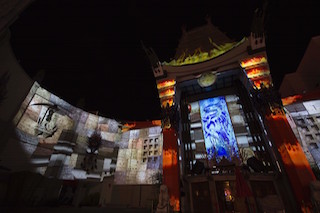 The central motif of the show projected onto the Chinese Theatre façade is a Chinese pagoda enclosing a dragon in relief. Dramatic lighting during the projection mapping show highlights the dragon, and animated elements bring it to life on the adjacent walls. The motif is not just physically central but thematically as well, since its lush Chinese-inspired architectural detailing and interior design, a throwback to the showy extravagance of Tinsel Town’s Golden Age, has contributed to making the Chinese Theatre an enduring Hollywood icon.

The flipping, cascading tiles in the midst of the projection mapping show are realistic representations of the actual hand- and footprint tiles in the Chinese Theatre forecourt. Almost a century of stars leaving their marks in the wet cement of the forecourt has gone a long way in making the Chinese Theatre the institution it is. Imparting an illusion of depth to the façade, the rotating, cascading and flipping effects are a proven bit of the visual language of projection mapping.

The montage of movie clips near the end of the projection mapping show is TCL’s way of tipping its hat to 100 years of cinema history. It also works as a sort of basic timeline of the Chinese Theatre’s history and that of Hollywood Boulevard itself, which matches in large part the history of big screen storytelling. Most, if not all, of the clips featured are pulled from films that premiered at the Chinese Theatre.

Finally, the Theatre crumbling at the end of the show exploits another classic trope in projection mapping visual language. Beyond the illusion of depth that the crumbling delivers, the dramatic ending is meant to give the audience a sense of climax and catharsis.

The technology used to merge and deliver the content consists of high-brightness Christie Boxer 3DLP projectors, a Christie Pandoras Box media server and a Christie Twist auto alignment system to blend the visuals.

...
Read More
Drive-Ins Past and Present