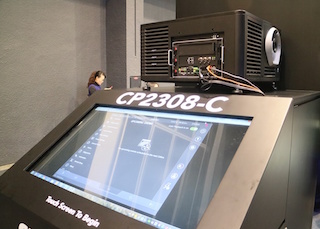 Christie has introduced the CP2308-C, which it calls a high value Xenon projector, based on a powerful new electronics platform. The new projector was unveiled this week at CineAsia 2016 in Hong Kong.

“We listened to the market and the result is a new level of value and user-friendliness in the CP2308-C, with many cost and feature benefits to our customers,” said Dr. Don Shaw, Sr. director, product management, Christie. “The electronics package underpinning the model has been thoroughly beta-tested in real cinemas for over two years and sees its first appearance in a mass market product at this major global exhibition.”

Created specifically for the burgeoning Chinese market, Christie says the CP2308-C is capable of projecting 9,000 DCI lumens and 10,000 lumens for alternative content. It comes with an integrated DCI playback engine, built-in automation features, and a user-friendly UX design interface. Perfect for cinemas with smaller screens, this unit will support alternative content sources through dual HDMI ports (along with the integrated DCI playback engine, supporting DCI cinema and streaming content).

Unique to Christie’s digital cinema projection lineup, the CP2308-C is the first available product to boast Christie’s latest Series 3 digital cinema electronics platform. The unit will be also compatible with Series 2 IMBs, with a firmware update, in mid-year. Following a successful launch of CP2308-C in China, Christie will quickly begin to introduce additional Series 3 projector models in the upcoming year.