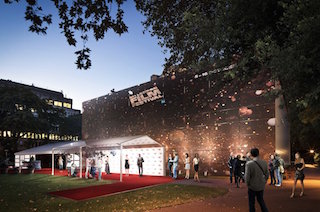 Christie is providing 4K projection to the British Film Institute London Film Festival at a unique temporary cinema that could become a blueprint for others. The Embankment Garden Cinema has also been built in celebration of the LFF’s 60th anniversary. For 11 days, with a 16-meter screen bigger than most London cinemas, the rigid-bodied structure will seat 800 people at London’s Victoria Embankment. It will also screen the LFF’s Official Competition and Strand Gala premieres.

Dominic Simmons, head of technical services at the BFI said “Just over the Thames from BFI Southbank and a stone’s throw from Leicester Square, one reason for the venture was to ensure audiences and filmmakers had the full festival experience, mitigating the lack of large screen auditoria in Central London, following the recently demolished Odeon West End cinema. We have tiered cinema seating, black box lining with serge, a full box office area and bar.”

Christie’s cinema sales manager, Phil Lord said, “We have worked with the BFI for many years and totally support their work as part of our commitment to UK cinema. They have come up with a novel way to extend top-quality cinema to a festival audience. The result is hugely impressive.”

The two Christie Solaria CP4230 DLPs supplied are on a 6-meter high platform behind the seating. “We’re using 6KSP lamps, which are very bright. We have no 3D screenings so opted for a matt white screen for better 2D image quality,” said Simmons. Gala showings of films will be taken from all the festival’s thematic strands, competition titles and host celebrity guests and directors.

Two generators run the Christie projectors, cinema servers, theatre lighting and all the power needed for the box and bar. The 12m-high, steel-framed structure is the largest of its type built in the U.K.