Choosing the Right Camera for the Job 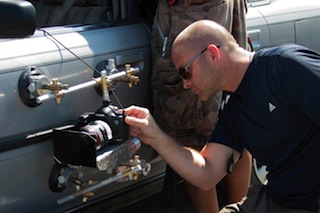 A director of photography for the past two decades, David Klein, ASC, has shot movies and television shows using numerous film and digital formats. “Every motion-picture film stock has its own look,” he said, “and that’s true of every digital cinema camera as well.” A firm believer that the needs of the production should always dictate its capture medium, Klein shot the 2011 feature Red State using a combination of digital camera systems, including EOS 7D Digital SLR cameras from Canon U.S.A., Inc., a leader in digital imaging solutions. More recently he tested the Canon EOS C300 Digital cinema camera. Both models prompted him to comment, “I’m happy that Canon is in the motion picture business.”

“I have been a Canon shooter my entire life,” Klein said. “I shot one of my first student films on a Canon Scoopic, which was a great 16mm camera. I used mostly film for the first part of my career, but have been half film/half digital for the past eight years or so.” 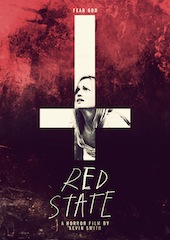 “It seemed while shooting that the Canon EOS 7D was the best way to get a lot of the shots we needed,” he said. “It’s a small camera but it delivers high-quality cinematic images. We used a remote-focus unit with it, and put its controller and batteries in a backpack. That way, the only thing in my hand was a pistol grip holding the EOS 7D camera, its lens, and the remote-focus motor. Many highly portable digital cameras have come out since the EOS 7D camera, but I still think it’s the only way that some of those shots could have been attained. The look we got from the EOS 7D camera, mixed with images from a larger digital cinema camera, was perfect for that movie.”

Although currently shooting a film-originated TV series, Klein has strong interest in using the Canon Cinema EOS C300 digital cinema camera, which he has tested, and its 4K counterpart, the Canon Cinema EOS C500 camera. “I know that those cameras are right for some project in the near future for me,” he said. “They are very user-friendly with great ergonomic design. You put them in your hands and you go – they’re a lot like a digital SLR camera. They also make great images and are super-sensitive in terms of their low-light abilities.”

Klein is very enthusiastic about the creative choices made possible by the wide variety of Canon lenses that can be used with the EOS 7D Digital SLR camera and the EOS C500 and EOS C300 digital cinematography cameras. Both the EOS C500 and EOS C300 cameras are available in two versions, one using industry-standard PL-mount lenses from various manufacturers (including Canon), and the other equipped with an EF lens mount for use with Canon’s line of more than 60 interchangeable EF Series lenses designed for Canon EOS Digital SLR cameras. Canon also offers a series of five precision-matched EF-mount Cinema prime lenses and EF- and PL-mount versions of two competitively priced top-end Cinema zooms with over 4K resolution as well as two compact, lightweight hand-held Cinema zooms with 4K resolution.

“Canon has always made phenomenal lenses, and to have so many of them as an option is, I think, pretty spectacular,” he said. “Canon is a great company that makes great cameras and lenses.”