The Challenges of Production Sound 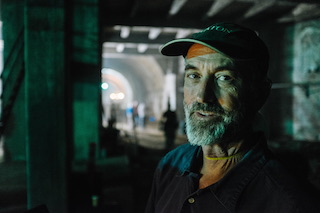 Like many of his colleagues in the sound production industry, Scott Harber began his audio career as a musician, more specifically as a member of a San Diego punk rock band. Over the course of his nearly 30-year career, Harber has worked on leading TV and film productions, including Borat, Noctunal Animals, Get Smart, Hell’s Kitchen, Gangster Squad, Wilfred and Castle, to name a few. He also owns Dang Me Sound, a production sound company based in Los Angeles. I recently spoke with Harber about some of the highlights his long career and the challenges of production sound.

Digital Cinema Report: Tell us about how you got into the industry, and what you’re working on now.

Scott Harber: I fell in love with the tech side of recording music while I was in the studio with my band and earned a degree in audio recording and engineering from San Francisco State University. After graduation, a friend mentioned a potential job opportunity in Hollywood and, in 1991 I landed my first job as a sound mixer on Rescue 911. In the almost 30 years since, I have been fortunate to work with some incredibly talented people on some amazing feature films and television shows.

Last year, I finished a three season run on the HBO show Ballers, and I recently finished Season 6 for the Amazon Prime show, Bosch. I recently also worked on the critically acclaimed show Barry for HBO and have been filming a Ken Burns series about Mohammad Ali. 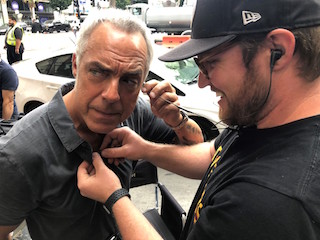 DCR: How did you first come to choose DPA Microphones?

SH: I had always known of DPA’s very high-end, great reputation for its music microphones. Then, my colleague and friend, Simon Hayes, used them on the movie Les Miserables. I was impressed by how well they adapted to transmitters, while also sounding so good. Once I realized it was a special microphone, I jumped fully into DPA. Now, I am a long-time user of the 4071 lavalier mic. I started using it on Castle about eight years ago.  I also use the 4017 shotgun mics and have just started to incorporate the 4018s into my repertoire.

Sometimes we end up using both lavalier and boom mics because DPA mics mix so well together. That’s a big deal not only for me as the mixer, but also for the people who have to blend all these sources together. Having the mics match incurs much less work on their part, and that saves the production team time and money. While the mics may be expensive up front, in the long-term, it’s the money saving direction to go.

DCR: Can you give me an example of a unique micing situation where DPA proved helpful?

SH: Working on Ballers, and shows where people aren’t necessarily wearing much clothing, the scale of the transmitters and mics, and the way they mount, is very important. There are times when you need to place a mic in a tricky place and the DPA’s work incredibly well for that. The mounts are more forgiving than other mics, even without concealers and everything that we generally use. Additionally, the actual mic head element is not overly sensitive, and it mounts quite well.

DCR: How has the versatility of DPA helped on your various projects? 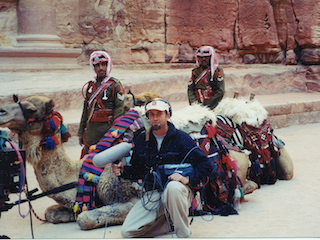 SH: It’s no secret that many actors tend to deliver lines quietly to pull the audience in. So quiet that, sometimes, they don’t even know when the other person is done speaking and they start stepping on each other. I always think “they’re going to have a tough time editing this together in post.” But, they are able to bring up the audio because of how clean the DPA mics sound. The problem with that is, now, we’ve got to turn the mics up really loud. If you don’t have good mics, you’ll hear a lot of the background noises as well. The way mics are mounted also affects the sound. That’s where DPA really shines. Its mics are clear, coherent and great for the voice.

Though many actors are now soft-spoken, I’ve also been fortunate to record people like Dwayne The Rock Johnson, Lance Riddick and Titus Welliver, who all have these wonderful, booming voices. There’s nothing like a great mic on a great voice. You just sit there and bliss out. With DPA’s ability to capture a very natural quality of sound, they’re wonderful for those situations.

Many of the shows I work on, like Bosch, are in extremely loud urban environments, and the rejection on the 4017 has been a huge asset. With prior microphones, even those that have excellent sound rejection capabilities I would often find that they were over-directional or that the sound was too colored due to the nature of narrowing a pickup pattern. DPA managed to make its mics sound wonderful and have great rejection, and that’s quite a feat. I think everybody could use DPA mics, from big to little productions. I am truly impressed by the mic, which is why I lead with DPA mics 98 percent of the time.