Celebrating Cinema’s Past, Present and Future 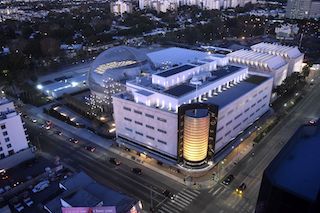 Last month, the much-anticipated Academy Museum of Motion Pictures opened to the public. Its stated mission is to advance “the understanding, celebration, and preservation of cinema through inclusive and accessible exhibitions, screenings, programs, initiatives, and collections.” The museum and its opening gala received a lot of well-deserved media attention. What hasn’t been so widely reported, however, is the important role that the Dolby family and company have played, and will continue to play, in the museum’s conception, design, and ongoing cinema efforts.

Dolby’s involvement started long before any construction began, explained Jed Harmsen, Dolby’s vice president of cinema & content solutions. He said, “We were involved quite early, both as a family and as a company. We’re founding supporters of the museum.” He added that Dolby’s intention from the very start was, “How could we bring enhanced audio and visual experiences to the museum.”

Designed by Pritzker Prize-winning architect Renzo Piano, the Academy Museum of Motion Pictures occupies a 300,000-square-foot campus on the corner of Wilshire Boulevard and Fairfax Avenue in Los Angeles.

The Dolby influence begins, literally, at the top of the museum and is especially evident in its two main movie theatres: the David Geffen Theatre and the Ted Mann Theatre. 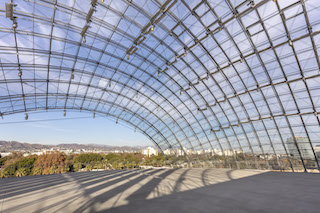 The museum comprises two buildings, the historic Wilshire May Company building, and the renamed Saban Building.  Connected to the Saban Building via glass bridges to the north, at the top of the soaring new 45,000-square-foot glass-and-concrete Sphere Building, is the Dolby Family Terrace – a circular, open-air promenade that extends beneath a custom-cut glass dome to offer sweeping views of the city, including the Hollywood Hills and iconic Hollywood Sign. The terrace was the setting for the opening gala, which featured many celebrities including Lady Gaga, Cher and Jennifer Hudson.

The Sphere Building also houses the David Geffen Theatre, a grand presentation space for major film events, public programs, live performances, movie premieres, and other special events with the world’s leading filmmakers. The 1,000-seat theatre is fully equipped to present films in many formats, including nitrate, 35mm, 70mm, and laser projection that supports Dolby Vision. The theatre also features Dolby Atmos immersive sound. Its stage can accommodate a 60-piece orchestra; its seating layout can be arranged to accommodate a sound booth; and catwalks can be rigged with theatre lighting. Dolby is the exclusive audio and visual sponsor of the theatre. 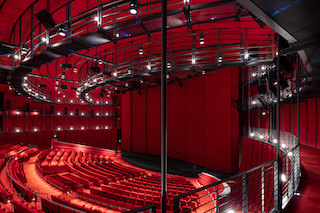 Harmsen called the Geffen “the showcase theatre” and said that several high-profile screenings have already taken place there.

The Ted Mann Theatre, located in the Saban Building, serves as the museum’s most utilized theatre. The 288-seat theatre offers curated screenings and special programs that include Oscar-winning films, family films, and rare and historical films, all presented in an intimate, elegant, art house setting. It has the capacity to present films in multiple formats, including 16mm, 35mm, 70mm, and laser projection supporting Dolby Vision. The theatre also features Dolby Atmos immersive sound. Fully accessible to moviegoers of all abilities, it also presents live performances, lectures, panels, symposia, and community events throughout the year. Dolby is also the exclusive audio and visual sponsor of this theatre.

Harmsen said the Ted Mann is the ideal place for filmmakers to engage one-on-one. He added that Dolby’s ongoing challenge with both theatres is, “How to make each of those stages really impactful.” 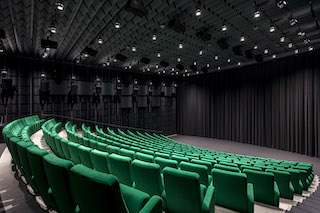 Dolby’s influence is also evident in the Composer’s Inspiration gallery where musician and composer Hildur Guðnadóttir, who won the Oscar in 2019 for the original score to The Joker, has created an original score in Dolby Atmos designed specifically for that space. Harmsen said the gallery is a place where aspiring composers can come to “listen to new original scores.”

The museum has named its educational center The Shirley Temple Education Studio and Dolby technology is installed there as well. The studio will provide hands-on workshops in moviemaking techniques, as well as inspire creativity and critical thinking. A core feature will be its teen initiative, serving students from diverse backgrounds in the greater Los Angeles area.

Dolby is even involved, although subtly, in an exhibit that seems likely to become popular with tourists. After much discussion, museum executives went ahead with a virtual reality room that lets visitors pretend they are walking onto the stage at the Dolby Theatre to accept an Oscar.

But, as much as Dolby is pleased and proud to be involved in a consumer-friendly celebration of cinema’s rich past – a past that includes decades of Dolby innovation – Harmsen said Dolby sees the museum more as “an opportunity to explore where the industry is going to go in the future. The company is committed to working with emerging filmmakers.”

Harmsen said Dolby’s role in the industry won’t change. “We’ll continue to create technology and engage with emerging filmmakers to understand what those tools can mean for them.” And the Academy Museum gives Dolby a great place to do just that in the motion picture capital of the world. “We think it’s a great opportunity,” said Harmsen.