With the success of The Hobbit and the first film to launch in high frame rate (HFR), what exactly is HFR?  Why do moviegoers need yet another option at the Cineplex? These questions were all addressed recently during an HFR 3D promotional shoot, hosted by GDC Technology and Red Digital Cinema. Salvy Maleki, as lead producer and executive vice president at GDC Technology, was in need of original HFR footage to use in a promo to showcase GDC’s HFR Integrated Media Block (IMB), only to find that there was no content available to license.  She took the initiative to organize a live-action, special effects shoot, shot in HFR 3D, to show off different frame rates, comparing 24 to 48 and 60 frames per second.

“This was a dream project to produce,” Maleki said. “It was a great opportunity to work with some of the industry’s greatest innovators in 3D and cinema technology. Everyone jumped on the bandwagon for the opportunity to be a part of this evolution that is taking place.” 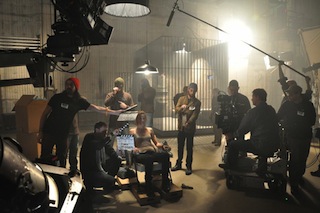 The companies Involved in the shoot included Red Digital Cinema, which contributed the Red cameras, as well as the shooting location at Red Studios Hollywood.  Action director Michael Sarna, CEO of Inmotion Entertainment, was selected specifically for his expertise in action/stunt scenes that best show off the capabilities of HFR 3D.  3ality Technica provided the stereoscopic 3D production team, rigs, and on-set acquisition equipment and services; IdentityFX provided all the post-production as well as the HFR/3D pipeline design and Pure Imagination Studios provided stereoscopic supervision and oversight.

According to Sarna, “When shooting action sequences on traditional film at 24 fps, the shutter opens and closes 24 times a second, capturing only 12 frames per second of useable footage. When shooting at 48 or 60 fps you are allowing the camera to capture two to three times as much information. So shooting at these higher frame rates you are guaranteeing complete capture of the action sequence. When filming digitally, panning the camera too fast as required in an action sequence, commonly results in warping or bowing of the image.  But the higher the frame rate, the less warping is experienced.” 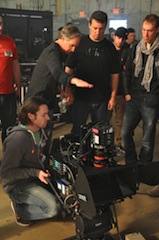 Ted Schilowitz of Red Digital Cinema described the shoot: "We shot with three 3ality TS5 rigs, with Angeniuex zooms, one on a Jib, one on a Dolly and one floating on various high hats and sticks to get as much coverage as possible, and we executed the shoot at a base frame rate of both 48fps and 60fps and within those project rates shot high speed, up to 120fps.  We did a lot of experimentation and learning on the set as we could with an amazing crew of experienced EPIC shooters and on set techs that were all there to learn with us, and we walked away with vast amount of footage to learn from and view on the big screen in both 3D and 4K at 48fps, 60fps and an extraction to 24fps.  The thing that was most telling was that a shoot like this took no longer to execute than doing a shoot of the same sophistication with 2D cameras shooting at the normal 24fps.  We never waited on camera set-up any longer than working in 2D and we had some very big stunts that could only be executed once or twice, and had to be ready and getting all the coverage we wanted at all these various frame rates. We were able to invite the crew to view the fruits of their labor right after shooting and screened the big fire gag stunt, some big high falls and gun shooting on a giant screen, instantly in 4K directly from the Epic 5K files, in the nearby 4K theater.”

“While on set, it was equally important to make sure what was being shot were not only great action scenes, but really great 3D moments,” said Andrew Tucker from Pure Imagination Studios.

“It’s really great to shoot in 3D, but there needs to be a reason for it to enhance the storytelling and excitement of what’s on screen, especially when shooting short-form content,” said Joshua Wexler. “There’s no reason to shoot 3D if you aren’t going to take advantage of immersing the audience into the movie.” 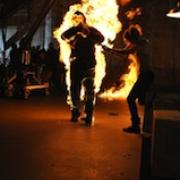 The post-production and visual effects team was on-set during the production to ensure the capturing of the data was done correctly.  “We were heavily involved from day one of pre-production and on-set to help manage the processing of the data, so we could transition efficiently into post, especially considering the mountain of information we knew we would be faced with,” said David Scott Van Woert of Identity FX.

“With higher frame rate comes double, triple, quadruple the amount of data that we must now sift through in post, often under the same time and budget constraints as 24 fps,” said Leo Vezzali, co-founder and stereoscopic supervisor of Identity FX. “Add 3D to the mix and you double that yet again. The key was to integrate post from the beginning, and help design the shoot from a data management perspective.”

According to Maleki, “This shoot probably was the most expensive five-minute promo ever shot, once you add up the overall value of talent and services. It started as a crew of 10 and quickly grew into a crew of 77, with 22 stunt guys, a fire gag, gunshots, two dollies and a crane.” But the footage captured truly proved to all involved that action shots in HFR 3D look incredible and producers and directors will in the future be opting for this new technology, and the audience will demand this ultra-realistic movie-going experience.”

All participating companies will show this demo reel over the next year at industry events, trade shows and conferences with intent to propagate the discussion amongst filmmakers and production professionals.