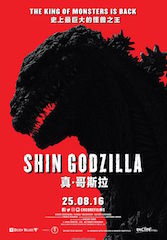 The creators of Godzilla are unleashing their newest monster Shin Godzilla at 60 Carmike Cinemas locations next month. The Japanese sci-fi flick, co-directed by anime superstar Hideaki Anno (Evangelion) and Shinji Higuchi (Attack on Titan), is set for a limited one-week release  starting October 11.

While there have been a few U.S. based Godzilla films, the real classic series has come from Toho, a Japanese based media company. Toho produced the first Godzilla movie in 1954; the first of what has become the longest continuously running movie franchise. Over the years, Godzilla has become a pop culture icon as well as an early and influential classic in the monster film genre. Godzilla is Toho’s most famous creation.

Shin Godzilla is Toho’s rebirth for the series and will include a good old-fashioned war between monster and humanity. Toho is making its own Godzilla film parallel to whatever Hollywood is doing with the famous giant monster. And in a brilliant move, they have brought in Anno to write and direct. The creator of Neon Genesis Evangelion has crafted something that is more in line with the ideas behind the classic Godzilla films.

It’s a peaceful day in Japan when a strange fountain of water erupts in the bay, causing panic to spread among government officials. At first, they suspect only volcanic activity, but one young executive dares to wonder if it may be something different—something alive. His worst nightmare comes to life when a massive, gilled monster emerges from the deep and begins tearing through the city, leaving nothing but destruction in its wake. As the government scrambles to save the citizens, a rag-tag team of volunteers cuts through a web of red tape to uncover the monster’s weakness and its mysterious ties to a foreign superpower. But time is not on their side—the greatest catastrophe to ever befall the world is about to evolve right before their very eyes.

The Shin Godzilla trailer can be viewed here.