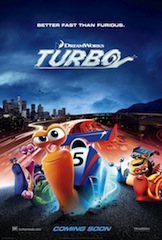 Carmike Cinemas has installed Barco Auro 11.1 3D sound in its Riverstone 15 theatre in Canton, Georgia, one of its premium large format BigD rooms. Carmike will debut its first movie mixed in Auro 11.1, DreamWorks Animation’s Turbo 3D on July 19. The Riverstone 15 is the region’s first location to add a 3D sound system.

Auro 11.1 by Barco, has been used on dozens of recent feature films by DreamWorks such as The Croods, Rise of the Guardians, and most recently, Turbo, as well as Disney’s Oz the Great and Powerful, and Lucasfilm’s Red Tails. Barco now has more than 50 titles committed for release in Auro 11.1 worldwide.

“We pride ourselves in offering our patrons a special movie going experience and the new Auro 11.1 by Barco is a unique, immersive sound system that takes cinema entertainment to a whole new level,” said David Passman, CEO for Carmike Cinemas. “Barco has been a great partner, helping us make the transition from 2-D to 3-D cinema audio in our premium auditorium an easy one, and also offering excellent support from planning through implementation to ensure our ultimate success.”

Auro 11.1 consists of a three-layered speaker arrangement (surround, height and overhead) to project sounds from their relative point of origin to deliver sound all around and above the patron. So when a plane flies overhead, the sound is heard zooming above the patron; similarly, when a thunderstorm erupts, the sounds immerse you from all directions, just as they would in real life. Auro 11.1 offers the most natural immersive sound experience possible.

“Carmike Cinemas is on the forefront of the ‘cinema of the future’ trend, and is wisely investing in the best technologies to offer patrons a truly differentiated movie going experience,” said Patrick Lee, vice president digital cinema for Barco North America. “When movie theatre owners consider what kinds of improvements they can make to lure people from their living rooms to the cinema, Auro 11.1 is definitely a smart option.”