Capturing Pristine Audio in the Field 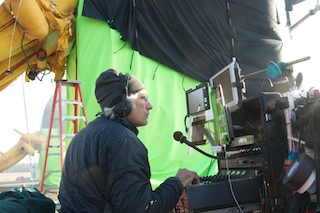 For his work on The Secret Life of Walter Mitty, Michael utilized two rigs, one portable and one cart-based, each outfitted with a Sound Devices 788T-SSD Digital Recorder and Sound Devices CL-WIFI interface. Michael was tasked with capturing all audio, including dialogue, effects and ambience, for the film. While the majority of the movie is set in New York, the production team spent five weeks shooting in Iceland.

“I redesigned my cart so it could be a little more flexible, portable and useable for the remote situations we were going to be presented with,” says Michael. “While I had the capability of using the 788T-SSD over my shoulder for the more challenging situations of working atop glaciers; there were times where I knew we would have more complicated work, and I wanted to have my cart. It wouldn’t have been possible to make it as small and durable as it was if it wasn’t for the 788T.”

Michael used this same cart for John Wick and Non-Stop. As John Wick was action-oriented, with a lot of gunfights and quick movement, it required a lot of sound effects. It also employed a file-based workflow. Sound Devices ability to seamlessly swap out removable storage was a huge asset onset, as Michael simply supplied his CompactFlash cards to Light Iron, a post-production company specializing in on-site dailies, digital intermediate, archival and data services for projects originated on file-based motion cameras, for them to process the dailies on set.

“I was basically handing over my sound every time a camera roll changed, to a person who was literally five feet away from me,” says Michael. “They then took my material and synched it with what was coming off the cameras, on the spot. We would rotate CF cards throughout the course of the day.”

The majority of Non-Stop was shot on an airplane-based set for nearly 40 days. The multiple track count on the 788T proved worthwhile in this situation, as there were times when Michael not only needed these high-track counts, but felt at ease in knowing that if he needed more tracks, he could easily have access to them.

“I’ve been doing this a long time, and have used a wide range of gear,” adds Michael. “I gravitated towards Sound Devices when it was time to upgrade my recorder because of its high-quality audio, portability and reliability. The fact that it is both made and serviced right here in the U.S. was a huge additional selling point for me.”

In addition to his feature work, Michael has also filmed in Africa on multiple occasions with Bill Clinton for an upcoming documentary on the former President’s global initiatives. “From the frigid cold of Iceland to the scorching heat of Africa, Sound Devices gear has been exposed to extreme weather and has consistently held up great,” concludes Michael. “The 788T is incredibly flexible and is now my recorder of choice for all my future projects.”