Capturing the Freedom of Dance 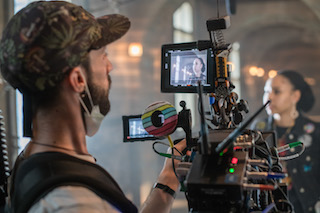 Following the lift of the first lockdown in London caused by the COVID-19 outbreak in early July, cinematographer Matteo Bangrazi and filmmaker Alfred George Bailey immediately jumped on set with the rest of their team to film the dance documentary I Still Breathe. The film is about a group of socially aware young adults who give extraordinary and deeply emotional testimonies of being black, mixed race, and white in London, England.

They passionately react to the impact of George Floyd's brutal and unnecessary killing, which has sent shockwaves globally. The response to this inhumane act has been an awakening in the collective social consciousness, as Black Lives Matter echoes around the world. This short film acts as a statement of hope for the world.

Filming with an Arri Alexa Mini LF under tight timing and COVID-19 safety conditions, combined with the natural movement desired in the shots, led Bangrazi to use a Steadicam for several scenes. For such a mission, Bangrazi, along with his camera team, Steadicam operator Tommaso Colelli and first assistant camera Oliver Munks, relied on the Cooke S7/i Full Frame primes lenses for the astonishing balance ratio, allowing for a super-fast lens swap, which would be required on a number of occasions given the body movement and dancing in the scenes. 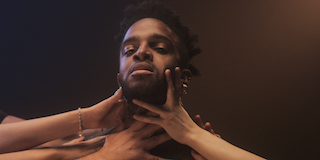 Another reason why Bangrazi chose the S7/i primes was his preference to shoot in full frame format because of the greater field of view. “We didn’t want this documentary to be shot as a drama, nor did we want a dry statement of people talking to a camera,” he said. “The 2:1 aspect ratio, speaks to me a lot, as it provides the cinematic feel enhancing the field of view without compromising the depth of field, and this could only be achieved with full frame.”

In terms of lighting, Bangrazi noted: “I wanted to portray the image of a body as a display, as if being watched in a theatre by the public. So I looked at doing this through a mono light source that drives the attention to the character. This effect helped me symbolize how the people have been viewing the tragic killing of George Floyd through their smart phones and televisions.” 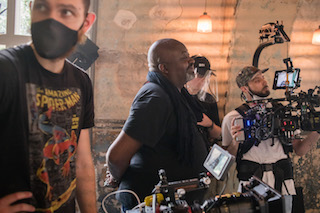 Bangrazi has worked with Bailey on several occasions and they work very well together, feeding thoughts between each other. Bailey also comes from a photography background.

“Working along with music and dance,” Bailey said, “has led us both to carefully study how to use the human form and shape to transmit a message: despite the ugliness that humans can show, there is always a message of hope, that comes from the freedom of the dance. The visuals in the film are made up by very strong color palettes. To add even further to these, I must add that we were very lucky to get access to the Battersea Arts Centre, a place that truly helps represent what we are trying to portray with the film. It is a building that rose from the ashes of a devastating fire to renew its mission, the charcoaled walls help transmit part of the energy.”

“Cooke has the ability to take the edge of digital sensors, which for me is very important, as I like my shots to convey feelings and emotions,” Bangrazi said. “I feel sensors are becoming increasingly sharp and lenses increasingly sterile, which can easily take you towards a clinical feel, which I usually do not aim for, unless a specific project calls for it.”

I Still Breathe premiered on Sky TV on October 28 and aired again on Sky Arts on November 4. Additionally, the short film is being screened at the Raindance Festival until November 7.