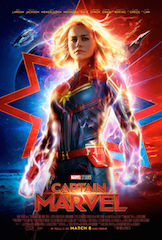 Captain Marvel, which opens March 8, will be the third movie from Marvel Studios to be converted into the ScreenX format. It is the latest collaboration between The Walt Disney Studios and CJ 4DPlex and follows the globally successful ScreenX release of Black Panther and Ant-Man and The Wasp. Captain Marvel stars Brie Larson in the title role and is directed by Anna Boden and Ryan Fleck.

ScreenX is the world's first multi-projection theatre technology that allows a 270-degree panoramic movie watching experience. ScreenX allows the audience to go beyond the frame of the traditional movie screen, utilizing a proprietary system to expand the center screen image to the side walls, surrounding audiences with imagery and providing a sense of being inside the movie.

Captain Marvel is another great movie from the Marvel Cinematic Universe that continues to showcase the full potential of the ScreenX format by taking us on an otherworldly heroic journey," said JongRyul Kim, CEO of CJ 4DPlex. "We are thrilled to team with The Walt Disney Studios and Marvel Studios to bring this inspiring new heroine to audiences in our newest cinematic experience."