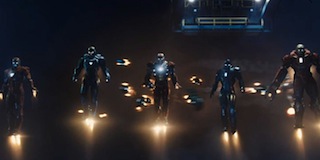 Marvel’s Iron Man 3 thrilled audiences with astonishing visuals, many of which were created by superimposing computer graphic imagery on to live-action stunt footage. Challenged by the precise matching those visual elements required, the Iron Man 3 effects team relied on six Canon EOS C300 Cinema cameras as “witness cameras” for accurate close-up tracking of stunt actors’ movements. The footage captured using Canon EOS C300 cameras was then used by visual effects facilities as a reference to convincingly overlay photorealistic CGI of Iron Man armor and other imagery on to main-camera footage.

“We are always pushing the boundaries of technology to come up with new and better ways to do our work,” added Iron Man 3 visual effects producer Mark Soper. “We did a lot of research, and the Canon EOS C300 cameras gave us the image quality we were looking for.”

Integral to the plot of the film are ambitious action scenes featuring performances by multiple actors in different Iron Man armor suits, and glowing super-villains. Most of the Iron Man suits seen in the action scenes and all of the glowing Extremis characters were created by superimposing CGI on to actors and stunt performers.

“All of this required an incredible amount of visual data-tracking,” Townsend explained. “The Canon EOS C300 witness cameras were placed on either side of our main picture camera and they recorded exactly what the picture camera was seeing, but from slightly different angles. Then, using various software programs and hard work, we were able to triangulate exactly where a person was in space at any particular moment, and then overlay a CGI ‘character’ on top of them.” 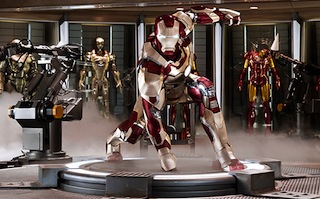 “The accuracy of this technique enabled us to ‘lock’ Iron Man CGI suit pieces onto an actor’s body so that the suit pieces moved in sync with the actor as he or she moved around,” Soper added.

“In the case of the Extremis characters, they had an internal volumetric glow to them, which was created by digitally replacing heads, arms, faces, or whatever a shot called for,” Townsend said. “Actors wore tracking markers all over their bodies, and we filmed them with Canon EOS C300 cameras and then used that visual data to accurately overlay glowing CGI effects right where a moving arm, or joint, or hand, or whatever, should be.”

The Iron Man 3 effects team was so impressed with the imaging performance of their Canon EOS C300 Cinema cameras that some EOS C300 camera shots were actually used in the finished film. These included scenes featuring the Mandarin, a villain in the film who issued terroristic threats via video recordings. The Mandarin also controlled an army of insurgents, supermen created with Extremis serum.

“There was a scene in which we used the Canon EOS C300 cameras for reference material for one of the Mandarin videos, and it turned out that we caught some great action footage with insurgents, so we used it in the movie because the quality was so good,” Soper confirmed. 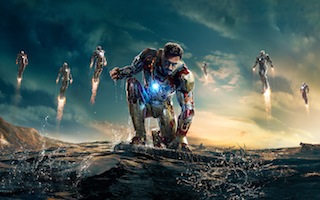 “The Canon EOS C300 camera footage worked very well with the footage from our primary capture cameras,” Townsend added. “The Canon C300 camera’s Canon Log is a similar format to what’s used by the primary capture cameras, so it worked out great.” Canon Log is a setting on the EOS C300 cinema camera that captures the full exposure latitude that the camera’s Super 35mm CMOS sensor is capable of. Canon Log provides film-style dynamic range between shadows and highlights that is essential for achieving cinematic subtleties in post-production color grading.

Another advantage of the Canon EOS C300 Cinema camera cited by the Iron Man 3 effects team is its compatibility with Canon’s line of more than 70 interchangeable EF Series photographic lenses as well as Canon’s CN-E Series Cinema Prime and Zoom lenses (the EOS C300 camera is available in the user’s choice of EF or PL lens mount versions; Canon Cinema Zoom lenses are also available in EF- or PL-mount versions).

“We take a lot of photographs in the visual effects department, and we generally use Canon digital SLR cameras – such as the EOS 5D Mark III – for these stills, along with Canon EF Series lenses,” Townsend explained. “We are very much a fast-moving ‘run-and-gun’ department, so the ability to take Canon lenses off the EOS 5D Mark III and our other Canon digital SLR cameras and quickly put them onto the EOS C300 cameras any time we needed particular shots was very handy for us.”

“The ease of use of the Canon EOS C300 camera itself was also important,” Soper said. “We had to hire additional operators for our six EOS C300 cameras, and even though they weren’t familiar with the cameras they were able to very quickly learn how to use them.”