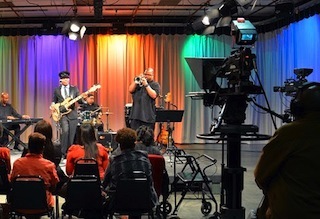 One of its first steps was to replace its outdated camera pedestals with camera support systems from Cartoni. CAN-TV currently has four Cartoni P 090 two-stage pedestals, each capable of supporting camera/lens packages weighing up to 90 Kg.

“Our old pedestals were built like tanks; they were made from heavy ferrous metals and weighed half a ton,” recalls CAN-TV chief engineer Jason Bryant. “We needed something that was stable, lightweight and easy to use.”

Bryant points out that CAN-TV provides production space as a public service and that much of its programming is produced by members of the general public with little or no professional training. Student organizations, senior citizens groups and groups for special needs individuals are among those who use its facilities. Cameras, support systems and other gear need to be robust enough to withstand rigorous use, Bryant says, “and yet be simple enough for everyone to use.”

The Cartoni P 090 fits the bill. “The way that Cartoni products are laid out in terms of where the locks are, how to steer them, where the drags are, how they move, the feedback from the head…it’s all very intuitive,” Bryant says. “It’s perfect.”

The Cartoni pedestals get plenty of use. CAN-TV produces dozens of shows each week, ranging from news programs to music and variety shows to religious programming. Among its more popular shows is Chicago Newsroom, covering local news and community affairs. It was recently honored for excellence at the 50th Chicago International Film Festival Television Awards and the Best of the Midwest Achievement Awards.

In describing some of the value that the Cartoni P 090 has brought to CAN-TV’s productions, Bryant cites Senior Network, a program produced by Chicago seniors that features a wide range of subjects and issues important to older Americans. “One of the crew had a fully loaded Cartoni P 090 and was trucking it across the floor,” he says.  “That was beautiful! That’s why I got those pedestals.”