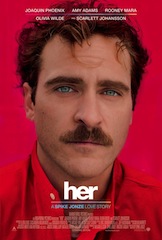 In Annapurna Pictures’ Her, director Spike Jonze tells a story, set in the slight future, of Theodore, a complex, soulful man who becomes intrigued with a new, advanced operating system that promises to be an intuitive and unique entity in its own right.  Starring Joaquin Phoenix, Amy Adams and Rooney Mara, and featuring the voice of Scarlett Johansson, the film has attracted extraordinary critical praise as well as Academy Award nominations for Best Picture, Best Original Screenplay, Best Production Design, Best Score and Best Original Song.

The motion picture was captured on Arri Alexa by Dutch cinematographer Hoyte van Hoytema, whose earlier work includes The Fighter and Tinker Tailor Soldier Spy.  Final post-production in advance of the films’ general release was completed at The Room, the specialty post-production studio located within Technicolor – PostWorks, New York, which has built a reputation for servicing high-quality independent films and documentaries. Ben Murray was the digital conforming editor. Final grading was applied by digital intermediate colorist Jack Lewars working under Jonze’s supervision.

The work that was done at The Room was unusual in that Lewars followed an earlier grade that was conducted at Stockholm post house Chimney under the guidance of Jonze and van Hoytema in advance of an early festival screening of the film. Finishing the film in New York afforded Jonze an opportunity to directly oversee the grade and simplified the process of incorporating final effects elements. 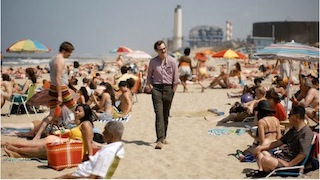 For the general release, Lewars had access to the production’s RAW files and used Chimney’s grade as a starting point. Lewars and the staff at The Room went out of their way to make sure the original vision of the film, as set by Jonze and van Hoytema with Chimney, carried through to the theatrical release. “We followed Hoyte’s lead,” explains Lewars. “At the beginning of the process, when we were transferring the project from Sweden to New York, we exchanged stills and were in regular contact to ensure everything was importing and displaying properly. We enjoyed collaborating with Hoyte and with Chimney—they trusted us to embrace the project they worked on for many months and to totally run with it.”

The relatively short period of time allowed for final grading at The Room was complicated by the fact that visual effects were still being completed. “We were receiving sky replacements, computer comps and other effects elements virtually up to the last second,” recalls Murray. “Our pipeline has the flexibility to accept new elements as they arrive and integrate them with raw shots in one timeline on our Lustres. That speeded up the process. Spike and Jack were able to instantly review every variation of a shot and give it their sign off.” 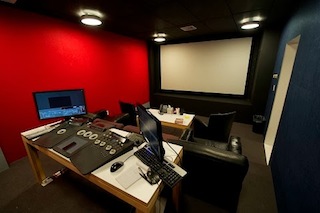 Murray credited post-production supervisor Hameed Shaukat with smoothing the management of incoming visual effects. “He maintained order where there could have been chaos,” Murray says. “He kept Spike and Jack insulated from all that so that they could focus on creative decisions.”

The aesthetic look conceived by Jonze and van Hoytema is distinctive but subtle and brilliantly reinforces the film’s time period and mood, says Lewars. “The color palette is very warm,” he notes. “We drained a lot of the blue out. There are some flashback scenes that we treated slightly differently, but even they are very warm.”

That very specific use of color highlights the film’s setting in a world that is slightly removed from the present and gives it a sweetly sentimental air. Lewars points to a scene where Theodore (Phoenix) takes his anthropomorphized digital date for a stroll along a beach. “The way Hoyte captured that scene is incredible as is the way color is used to further bring out the feeling of romance,” he says. “There’s not a lot of contrast. Everything is lifted. The blacks are lifted. Nothing too stark or crushed, or too bright. It feels like you could lay your head on it. It feels like love.”

Due to the complexity of the project and the short post schedule, the grading process continued virtually around the clock. Despite the long hours, Lewars notes, the team at The Room remained enthusiastic as it was clear that Her was an exceptional film. “We were thrilled to be part of it,” he says. “We finished the grade at one a.m. and then immediately screened it in the theater. By the time it was over, at three in the morning, we all had tears in our eyes.”