The Boy And The Beast gets Annie Nomination 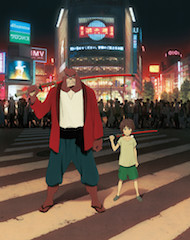 The International Animated Film Society, ASIFA-Hollywood, announced on Tuesday the nominations for its 43rd Annual Annie Awards, which recognize the best in the field of animation. The list included a Best Animated Feature-Independent nomination for Mamoru Hosoda's The Boy and The Beast – the critically acclaimed anime film from Studio Chizu, which is being distributed in the U.S. by Funimation Entertainment.

ASIFA-Hollywood voting members will receive ballots on January 1. Winners will be announced on February 6 at a black tie ceremony in Royce Hall at UCLA.

The Boy and The Beast is one of four inaugural nominations in the new Best Animated Feature-Independent category debuting at the 43rd annual awards.  In the words of ASIFA - Hollywood president Jerry Beck, "We will now recognize not only features in wide-release, but also the independent animators, international studios, anime and special productions that might not otherwise get the attention they deserve."

Widely viewed as now surpassing Hayao Miyazaki as the world's most prominent anime director, Hosoda has risen to acclaim based on the commercial success of his last three animated feature films: The Girl Who Leapt Through Time (2006), Summer Wars (2009) and Wolf Children (2011) – all of which were box office hits. Most recently, a critic at The Hollywood Reporter quipped, “Exit stage left Hayao Miyazaki; enter stage right Mamoru Hosoda?"

The Boy and The Beast, opens today for a one-week limited engagement in Los Angeles. The movie will open in theaters nationwide in February.