Blood Runs Thick on a Budget 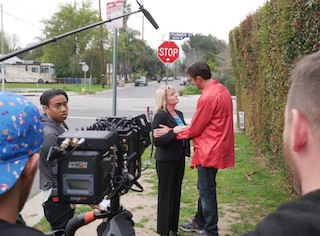 Regardless of budget, every director and cinematographer wants their film to look its best. That was no different with Blood Runs Thick, a low budget, indie horror feature from director Romane Simon and shot by Los Angeles-based Nik Shaw.

“Cookes are my favorite anamorphic lenses,” said Shaw. “I especially like the coated Cookes because I can run-and-gun without a matte box and avoid flaring. Even wide open, I get a super sharp, beautiful image with the Cooke Anamorphic/i lenses. I’m talking about no distortion with the 40mm and higher lenses, and minuscule distortion on the 32mm. And then there’s the excellent bokeh. I’ve used them on commercial shoots and two other features. I typically team them up with the Alexa Mini to achieve an optimal weight.”

Using his own Alexa Mini digital camera, Shaw rented the 32, 40, and 75mm primes, plus the 35-140mm 4:1 zoom anamorphic from Citizen Cine in Hollywood.

“I wanted to make this my best film yet, something to be very proud of,” said Simon. “I did a lot of research on other films that used the Alexa and Cooke Anamorphic/i combination, and with Nik’s encouragement, I knew that the Cooke lenses would give us the high-end look we wanted, especially on a low budget feature. After all my research, I just wanted to use the Cookes – other lenses didn’t come close to the look I was after.”

Shot in Los Angeles, The Valley, Woodland Hills, and Van Nuys in California, Blood Runs Thick is the story of a beautiful young woman who struggles with frightening hallucinations and a crumbling mental state after her husband goes missing. Caught between what’s real and what’s not, her nightmares become reality.

“Nik was able to give me the creative look I was going after, similar to Don’t Breathe [2016],” said Simon. “I saw his work and knew that he was someone I clearly wanted to work with. We were always bouncing ideas off each other, and knocking heads, giving me the creative process that I needed.”

Shaw’s vision for Blood Runs Thick was to make it look natural, even though all of the scenes were artificially lit. “I was inspired by Kiss Kiss Bang Bang [2005] and its neo noir style. And the Cooke lenses brought that extra kick to the picture, allowing me more creativity than with other lenses, especially in low light. I wanted this beautiful blue saturated light and the Cookes gave me exactly what I wanted and really upped our production values in the way that they handle highlights.”

After his experiences shooting and posting Blood Runs Thick, Simon is now a Cooke lens fan as well. “They’re amazing lenses with a lot of room for creativity, regardless of lighting, especially for close-ups and eye detail, giving a director everything they need to show emotion.”

With his eye on his next project, producing and directing Voice in Africa, Simon has already committed to using Cooke lenses.