Beware of Images Documents the Perils of Media 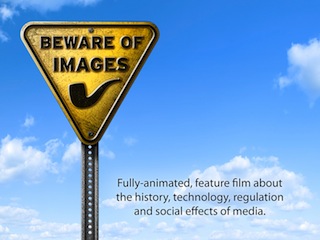 As a media educator, graphic designer, filmmaker and advertising professional, Sergio Toporek of Vancouver has a keen awareness of the power of visual representations – from many different angles. Over the past six years, he has put his heart and soul into an ambitious project that explores the intricate relationship between the technology, regulation and social effects of media.

Entitled Beware of Images, it is a feature-length, animated documentary about the history of visual representation. Toporek's primary goal is to educate the public about the media, how it affects us and what we can do to improve the current landscape.

For Toporek, all media is educational. "But what is it teaching us?" he asked. Born and raised in Mexico City, Toporek studied photography and graphic design. After moving to Vancouver in 1998, he focused his career on corporate advertising but, slowly and steadily, became disillusioned with the business.

"Corporate advertising was promoting an endless cycle of desire, consumption, obsolescence and dissatisfaction," Toporek said. "Meanwhile, serious issues receive little or no attention. Thus the concept for Beware of Images was born. The documentary deals with issues such as the history of visual language and its application to propaganda, gender and cultural stereotypes, media violence, broadcasting technologies and advertising.

Beware of Images is aiming for completion in October. So far, more than $30,000 has been raised through a Kickstarter campaign. Toporek needs an additional $8,000 for animation, music and sound design. He also requires funding for promotion – visits to theaters, schools and community centers.

Depending on their donation levels, Kickstarter contributors can receive digital downloads of the film, DVDs, T-shirts, credits in the movie, school media workshops and tickets to Vancouver for the premiere. There has been much enthusiasm and support for Toporek's project. The Beware of Images Facebook page has gathered over 250,000 fans.

"While there's an ongoing debate about the potentially harmful effects of media technologies, the truth is that these technologies are here to stay and will continue to expand," he said. "The real power lies in better understanding our media environment. In fact, the only truly dangerous media is the unexamined media.”