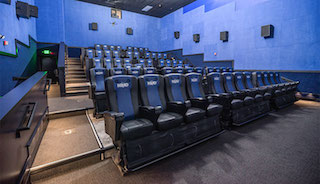 B&B Theatres will install ten MX4D auditoriums in new builds, existing theatres and retrofitted cinema acquisitions across the United States by the end of next year. “The expansion of our relationship with MediaMation proves our belief in MX4D,” said Brock Bagby, executive vice president of B&B Theatres.

"We plan to have three more MX4D auditoriums open by the end of this year in Texas, Missouri and Kansas,” Bagby added. “And have at least seven to follow next year throughout the country. The occupancy rates are exceptionally high for these fun and immersive MX4D auditoriums and the film product is a steady flow of multi-genre hits all year long. And, the two company teams work together great on construction, maintenance, operations and marketing “

MediaMation’s MX4D, manufactured in Torrance, California, feature a patented armrest which delivers uniform effects such as wind, water, and scent to every customer. The seats deliver patrons neck and leg ticklers, seat rumblers and back pokers. The atmospheric effects through the auditorium include snow, rain, fog, and carefully programmed light effects.

Howard Kiedaisch, CEO of MediaMation said, “B&B’s commitment to boldly increase their MX4D footprint is a testament to the mutual success of this valued partnership. We truly admire their circuit’s storied past, and are honored to be part of their dramatic future as the B&B team is clearly leading the industry in creating innovative and exciting cinema formats and experiences”

Upcoming releases in MX4D for 2019 include Disney’s Maleficent: Mistress of Evil with Angelina Jolie, and Frozen 2 and Star Wars: The Rise of Skywalker. Other anxiously awaited films in MX4D include Sony’s Jumanji: The Next Level and Charlie’s Angels, Paramount’s Gemini Man with Will Smith and Terminator: Dark Fate open In October and November, respectively.