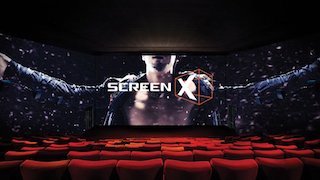 B&B Theatres and CJ 4DPlex have announced the development of several new ScreenX theaters located in B&B multiplexes across the U.S. The new openings will result in a total of eight ScreenX auditoriums across B&B multiplexes by 2023.

B&B Theatres has begun the rollout of new ScreenX theaters, starting in Athens, Georgia which opened in early April. Following Athens, B&B Theatres will open a new ScreenX auditorium at their Mall of America location in Bloomington, Minnesota in May. Paramount Pictures' "Top Gun: Maverick" will be the first film featured in the ScreenX auditorium.

Additional ScreenX locations in development, which will be located in B&B's PLF Grand Screen auditoriums and will open in 2022 and 2023 will include theatres in Omaha, Nebraska, Wesley Chapel, Florida, and Red Oak, Texas

"B&B Theatres are great partners who have committed their largest PLF auditorium with luxury recliners to create the most immersive and differentiated experience available today in cinema," said Don Savant, president and CEO, CJ4DPplex America. "We can't wait for audiences in new cities to see what ScreenX brings when coupled with an amazing slate of upcoming ScreenX films."

In 2018, CJ 4DPplex and B&B Theatres partnered to introduce the largest ScreenX auditorium in the world in their PLF Grand Screen auditorium at their B&B Liberty Cinema 12 in Liberty, Missouri. That screen is over four stories tall and seven stories wide, and offers moviegoers one of the most premium, immersive viewing experiences in history. Currently B&B Theatres has ScreenX locations in Liberty, Missouri, Overland Park, Kansas and Ridgeland, Mississippi.

"We're excited to extend our partnership with CJ 4DPlex and continue the successful introduction of ScreenX to our audiences," said Brock Bagby, executive vice president of B&B Theatres. "We are continuing to innovate the way people experience movies and look forward to expanding our work with CJ4DPlex for years to come."

ScreenX is the world's first multi-projection cinema with an immersive 270-degree field of view. By expanding the image beyond the frame and onto the walls of the theatre, ScreenX places the audience directly at the center of the story, creating a visually immersive viewing experience unlike any other. To date, there are now more than 372 ScreenX auditoriums around the world in 38 countries.