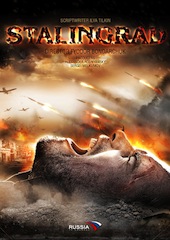 Russia has a long and proud tradition of 3D films and now comes a new entry. Already selected as the Russian entry for the Best Foreign Language Film at the 86th Academy Awards, director Fedor Bondarchuk’s Stalingrad claims to be Russia's first movie ever to be completely produced with digital stereoscopic 3D technology.

Stalingrad recounts the Battle of Stalingrad in 1942, a turning point in the Second World War. Soviet troops eventually won control of Nazi-occupied Stalingrad, now modern Volgograd. Produced by Non-Stop Production, a subsidiary of AR Films and Art Pictures Studio, Stalingrad is ultimately a love story that takes place in the middle of a brutal war. Action scenes in the movie depict German bomber planes flying directly at the audience and dramatically crashing in flames across the big screen. The Battle of Stalingrad lasted for months and the Russian victory in 1943 led the way for the Allied victory in World War II. Some of the cast includes Petr Fedorov, Dmitriy Lysenkov, Alexey Barabash, Andrey Smolyakov, Oleg Volgu, Yanina Studilina, Maria Smolnikova, Thomas Kretschmann and Heiner Lauterbach.

Two Red Epic cameras were used with 3ality Digital rigs for the stereoscopic 3D shoot in 5K for post-production in three formats: Imax 3D, S3D and 2D. Filming took place in autumn 2011 over 17 days where two key battle episodes were shot with 900 actors in crowd scenes. The shooting process commenced again from May 2012. Massive sets had to be constructed on an enormous scale on location in St. Petersburg where every detail was reproduced, such as recreated bombed-out buildings.

Moscow-based RSS Production used Mistika 3D technology throughout to achieve the painstakingly accurate detail that a project of this scale entails. The RSS team's brief was to fix many of the key elements in post where attention to detail was vital for the final delivery. Led by RSS post-production producer Alexander Dukhon, the team included Mistika operator and DI specialist Daniel Ovrutskiy.

Dukhon said, “When we first laid eyes on the material, we were impressed with the director of photography's work as well as that of all the artists involved. The textures were incredible, whether they were those of the surface of a wall, for example, or the face of the main character; they were so realistic and it looked tangible. Our job was to then work on the stereoscopic 3D elements with the given footage, which was really brilliant, but we had to work hard to bring it up to the required standards that large formats such as Imax 3D dictate.” 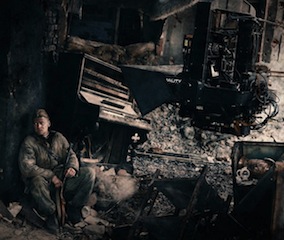 With the innovative tools available for automatic stereo 3D alignments in Mistika, Dukhon and his team managed to build a very fast production process. The project was divided into several stages – firstly, rapidly aligning all the shots followed by then isolating specific challenging ones and switching to full manual mode, giving the team complete control over those images to work on. Dukhon said, “Using Mistika meant that we spent less time on the alignment phase of some scenes than the time required for copying and forwarding the material. Mistika's powerful tools allowed us to correct the serious polarization artifacts and geometric distortions without destroying or affecting the image. We then received the ungraded materials in DPX 2K Log and we aligned the color and polarization issues, and were pleasantly surprised that even after a major color grade of the corrected image, there were no color misalignment and no need for fine-tuning at all thanks to Mistika.”

Ovrutskiy who was fully responsible for the stereoscopic 3D in the project, devoting more than three months to it, said, “Mistika became a convergence point of all the hard work and experience that was put in the Stalingrad project by the amazing 3D professionals from all around the world. Being a part of the crew right from the start from the shoot and learning from amazing stereographers Matt Blute and Nick Brown, allowed me to use this knowledge to enhance 3D quality of the film to the highest standard.”

He said, “It doesn't matter how good the team is, or how advanced the shooting technology is, you still have to adjust the 3D imagery to match the Imax release quality it dictates, and Mistika's toolset enables you to do that in the shortest possible time.” 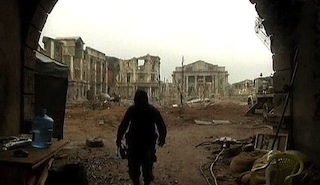 Another Mistika Artist working on the 3D post with Ovrutskiy and the team at RSS Production was Alvaro Barrasa, who flew over from London to work on the mammoth project. Barrasa's initial challenge was coordinating changes on the Left Eye at that initial stage. He said, “Mistika still enabled me to make simple fixes on the Left Eye and enabled easy access to choose between the eyes to facilitate the process which helped to speed things up considerably. As we made the decision to work in parallel with the color correction sessions, our color matching fixes didn't affect what the color grader had achieved because Mistika's exceptional 3D workflow allows you to modify only one eye, while there is work going on in parallel on the other which is highly time efficient.”

Ovrutskiy and the team at RSS Production were concerned about color mismatches at the shooting phase of the production. “We had massive polarization and color issues especially regarding the tank's metal plates, the soldier's helmets, water reflections, muzzle flashes and tons of non-matching lens flares,” he said. “I was amazed as Mistika fixed 95 percent of those issues with literally one button.”

For the more complex shots, Ovrutskiy used Mistika's node compositing toolset with rotoscoping, which helped with tracking the challenging areas in order to fix the remaining issues. 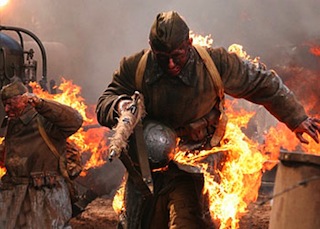 Working with Ovrutskiy and the team, Barrasa also used Mistika to color-match shots, correct complicated polarization issues and clean lens dirt that created color mismatching in areas - he was able to resolve these issues effortlessly using Mistika. “Thanks to Mistika's powerful tools, these elements were pretty straightforward to rectify in post,” he said. “I used Mistika’s color matching tool and its optical flow feature to match the complex polarization issues. In some cases, I also created miniature compositions to match elements from one eye to the other which is a fairly fast process in Mistika and not as laborious as in other systems.”

Geometry matching was one of the most complicated tasks the team faced. The Imax 3D delivery format dictated stringent exacting standards to adhere to, and so it was imperative that the geometry corrections were rigorously tested and precise. As with all stereoscopic 3D footage, the team was confronted with the usual challenges that can arise such as size, rotation and keystone issues which Mistika is a master at solving.

Describing that process, Ovrutskiy said, “I used Mistika's automatic stereo alignment toolset as a basis for the geometry corrections, which already delivered very well even at that early stage. I then used Mistika's full manual mode and deep compositing toolset for the final stage, which enabled me to achieve alignments that were close to perfection, on incredibly complex shots that had key-stoning, lens distortions, Y-shifts and perspective changes all at once. We had to fix more than 800 shots in just under two months on material that had several stereo misalignments, and with Mistika's help, I think we succeeded in bringing the best 3D possible to the audience.”

Barrasa added, “These were really easy for us to fix using Mistika and we utilized the clever automatic and semi automatic tools that Mistika provides to solve the majority of our geometry work. Shear, scale X differences and non-linear wide lens distortions that created random Y shifts presented more demanding challenges which heavily relied on Mistika's high-end solutions to calculate, using the advanced optical flow-based pixel-by-pixel matching modes.” One of the hidden strengths of Mistika is that although it provides incredibly powerful stereo matching tools, Mistika also allows the operator to combine any number of other effects in order to end up with perfect stereo matches.

Barrasa went on to describe some significant key-stoning issues in both eyes that he had to tackle and how Mistika came to his rescue. “One particular challenging shot arose which involved facing an accumulation of various complex issues all at once,” he said. “It would have been overwhelming had Mistika not been there to rely on.  At first, I used the Stereo tool, then warped the image a fraction in order to optimize the optical flow and then I composited the elements accordingly to finally arrive at the best result. One tiny aberration or distortion on a monitor screen would be blatantly conspicuous on the giant Imax screen, so we were extremely mindful of this throughout the entire process.”

Barrasa also worked on solving size mismatching issues that appeared on some of the corners of the image. He explained that it was almost impossible to detect some of the mismatches using the anaglyph mode so he had to conscientiously zoom-in considerably closely to the image, and exchange Left and Right Eyes in order to carefully locate the cause behind the phenomenon. He said, “Once the defect was localized, we then tackled that area and used a combination of Mistika's extraordinary optical flow, warping and compositing tools to perfect them seamlessly.”  Barrasa concludes “I am so proud to say that we achieved the best and highest quality results in all of the stereo 3D shots we worked on in Stalingrad, and they were all on time – all thanks, once again, goes to Mistika’s incredible and unique capabilities that contributed to making this possible.”

As a final pass for the picture, Ovrutskiy accomplished an entire depth-grading job, with post stereographer Nick Brown. “It was an amazing experience, as we were able to do all dynamic convergence pulls and animated floating windows for the whole two hour feature in just five days of work,” Ovrutskiy said. “It was almost too easy, because all we had to do was push Mistika's AutoKey button and make all creative decisions in a click-to-converge-here fashion.”

Dukhon said, “It is a very exciting time in Russia as Stereo 3D is only just developing and is still a very new format here but there is a growing demand for it, as audiences enjoy seeing the screen come alive in 3D. Producers are still afraid of the format and that is why our company aims to dispel the myths.”

The film will be shown internationally at Imax 3D cinemas and will be released in the U.S. early 2014.