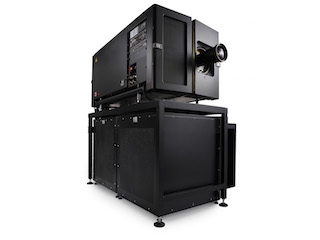 “Exhibitors are continuously looking for ways to improve the movie experience while optimizing their cinema operations to minimize costs,” said Stijn Henderickx, vice president cinema at Barco. “We bring laser benefits to all cinema screens. From the ultra-bright, high-contrast 6P RGB flagship laser projectors to our cost-effective laser phosphor projectors, we provide the widest range of DCI-compliant laser-illuminated cinema projectors in the industry. This enables every exhibitor to tap into laser projection – irrespective of screen size, theater size, or budget.”

There is an upgrade path is available for customers who already own a flagship laser projector from Barco.

By introducing the DP4K-BLP projectors with native 4K and high-lumen light output, laser phosphor projection will now find its way to many large cinema screens across the globe. The SLP range brings laser phosphor quality to the smallest theaters at a very attractive price point. Varying in brightness levels – up to 24,500 lumens – and providing native 2K or 4K resolution, the laser phosphor projection portfolio combines Barco’s renowned DCI-compliant image quality with the outstanding uniformity and contrast that’s unique to laser illumination. The laser phosphor projectors show improved image quality on both white and silver screens and are fully compatible with popular 3D systems. Additionally, the projector’s light output remains constant over time.

Exhibitors who already own a B-series or S-series Barco cinema projector don’t need to invest in an entirely new model to benefit from laser technology. They can simply retrofit their current projector with a laser phosphor module. Based on a laser light source, the laser cinema projectors increase uptime and eliminate the costs, administration, and maintenance related to lamp-based illumination, for worry-free operation. The light output of the laser phosphor projectors can be dimmed to 30% of their initial brightness, enabling users to show both 2D and 3D content from one and the same projector.

Barco has also introduced the Barco Alchemy Integrated Cinema Media Processor (ICMP) as an option. With it, exhibitors can leverage the benefits of alternative content by directly hooking up their UHD Premium sources to the projector. Two additional HDMI2.0 interfaces have been added to the ICMP, while keeping its legacy HDMI1.4 (and SDI) inputs. This gives users the option to hook up four different sources.