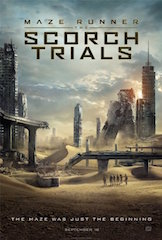 “We’re honored to partner with China Film Group to install Asia’s first Barco Escape theatres, further signifying the format’s ongoing momentum and global expansion since its 2014 launch,” said Todd Hoddick, CEO of Barco Escape.  “CFG is a leader in the movie industry and we’re excited to strengthen our longstanding relationship with them by bringing this immersive new cinema experience to audiences in China.”

“As a long-term Barco partner, we are pleased to be the first to install Barco Escape in China,” said Zhang Yanqin, general manager of the Beijing division of China Film Group cinema. “As one of our most popular locations, the Changping AEON Cineplex is the perfect place to introduce moviegoers to this brand new experience our customers can only get by coming to the theatre.”

After debuting to positive reviews from audiences in fall 2014 with 20th Century Fox’s The Maze Runner, Barco Escape announced a five-year, multi-title per year agreement with the movie studio to release more films in Barco Escape.

“We started working with Barco on this technology because we believe immersive experiences are the future of cinema,” said Chris Aronson, president of domestic distribution at 20th Century Fox. “Now that Barco has upgraded its Barco Escape systems to be fully DCI compliant, we are further interested in finding tent pole movies for the format that will inspire audiences to leave their homes and go to the theatre to share in this unique experience.”

Hollywood producer Jerry Bruckheimer also signed on to use the technology on a new, upcoming project, along with re-envisioning a classic Bruckheimer film in the format.  Since its initial launch last year, Barco Escape expanded its footprint to more than 20 theatres in the U.S., Europe, Mexico and now China for Maze Runner: The Scorch Trials release, with plans for more than 150 theatres globally in 2016.