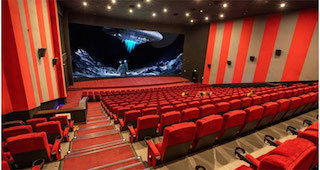 Barco today entered the LED cinema screen market in a big way by purchasing a stake in Unilumin, a Chinese company that manufactures LED components on a major scale.

Barco CEO Jan De Witte said, “LED technology continues to develop at a rapid pace and starts to open up interesting opportunities in mainstream markets in the entertainment and enterprise segments. With this partnership we are strengthening our global competitive play as we further expand the hardware component of our hardware-plus-software-plus services’ proposition towards our target markets.”

Currently Samsung, with its Onyx LED Cinema Screen, is the only company with systems installed in cinemas around the world. Sony has shown prototypes at various trade shows but has yet to bring a screen to market.

Barco’s parent company, Cinionic, had a Barco LED screen in its exhibit at CinemaCon earlier this year. Cinionic’s chief marketing officer, Carl Rijsbrack told me then that his company had expected at least one manufacturer, in addition to Samsung and Sony, would be showing an LED cinema screen at the show and he wanted to be able to tell customers that Cinionic would be ready when the market was ready.

Today’s announcement did not hint at when Barco might introduce its own LED screen to the cinema market. The company recently released its Barco Series 4 laser projectors and has enjoyed brisk sales. Barco currently has a global market share of roughly half the installed base of digital cinema projectors.

The companies did suggest that they would be moving soon to have a system ready for DCI certification.

Barco acquired a five-percent stake in Unilumin with the purchase of approximately €54 million worth of shares from Unilumin’s majority shareholder and CEO Mingfeng Lin.

“Barco is our route to the high-end market offering access to a broader and more global audience,” said Mingfeng Lin. “In addition, this cooperation also allows us to leverage Barco’s image processing capabilities in LED solutions. Both companies are convinced that the mutual recognition of each other’s strengths will result in a win-win opportunity and a long-term beneficial partnership for everyone involved, including the customer.”

Unilumin said joint development of LED display solutions would have a special focus on the cinema market.