Barco Auro 11.1 Makes Taiwanese Debut with Black and White: The Dawn of Justice 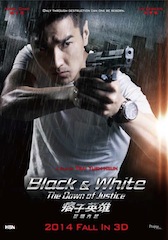 Barco’s Auro 11.1 immersive cinema sound format made its debut in the Taiwanese movie industry with the action blockbuster Black and White: The Dawn of Justice. Released October 2 it is the first Taiwan-made movie to be mixed in the format. Created by an international production team, the movie currently runs in theaters across China, Taiwan, Singapore, Malaysia, Vietnam, and Hong Kong.

Set in the fictional metropolis of Harbor City, Black and White: The Dawn of Justice is the sequel to 2012’s Black and White: The Dawn of Assault. For this latest installment, director Tsai Yueh-Hsun pulls out all the stops to create a movie that is much grander in scale than its predecessor: an international team of filmmaking professionals, 3D production companies from Asia, Europe and the U.S., unique special effects and Auro 11.1 sound.

Using a 3D sound reproduction speaker layout based on three axes (width, depth and height), the Auro 11.1 system creates a life-like acoustic experience. By allowing sound to come from all around and above, moviemakers are given a powerful tool to immerse their audience in what’s happening on screen. The latest installment in the Black and White series lends itself perfectly to present the possibilities of the format: from the high-speed car chase that opens the movie, to the heroes’ breathtaking attempts to save their city from total destruction.

Black and White: The Dawn of Justice is the latest addition to the list of movies mixed in Auro 11.1. Over the last few months, the format was featured in Transformers: Age of Extinction, How to Train Your Dragon 2, The Amazing Spider-Man 2, Lucy, Kanchi and many, many others. Upcoming Auro releases include The Hunger Games: Mockingjay – Part 1, John Wick and The Penguins of Madagascar in the pipeline for the end of November.