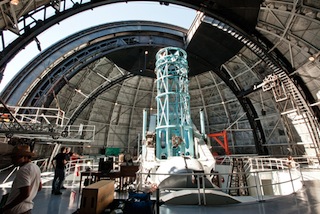 Band Pro Film & Digital will screen the 4K short film Viewing the Night Sky in Summer in Amsterdam at the 2013 International Broadcasters Convention.  Sony, a key sponsor of the short, will project the new work in their 4K-theatre at the show.

Captured with the new Sony F55 camera and utilizing Leica Summilux-C prime lenses and Canon Cinema EOS zooms, the film was shot on location at the famous Mt. Wilson Observatory outside Los Angeles, California.  The 100-inch telescope dome featured in the short was completed in 1917 and is known worldwide for the key discoveries made there by astronomer Edwin Hubble.

Producer Brett Gillespie said, “The Observatory was an ideal location.  The finely detailed craftsmanship of the dome interior is pretty stunning, and a real pleasure to see in 4K.”

Wedick said, “The observatory is a gigantic precision handmade metal structure full of texture, with a giant door to let sunlight in, so we were able to showcase not only the 4K resolution of the F55 but also its ability to deal with extremes in dynamic range, all the while keeping a pleasing skin tone.  Photographing this location in 4K RAW with 4K+ capable lenses is hopefully a fitting tribute for one of the key pieces of optical technology of the 20th century."