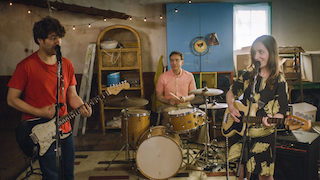 Released this month by IFC Films, Band Aid marks the directorial debut of Zoe Lister-Jones, best known for her acting roles on Life in Pieces and New Girl. The film has been earning rave reviews for its engaging story of a couple who turn to songwriting to work out their marital difficulties. It has also generated lots of buzz for Lister-Jones’s unique decision to employ women in all key production and post-production crew positions.

That included colorist Allie Ames from Technicolor PostWorks New York, who worked with the director and cinematographer Hillary Spera through editorial conforming and final color grading.

“Films of that era have a tangibility; things feel very organic,” she said. “We went for something similar where the action feels improvised, even though it’s scripted, and we’re just there with the camera.”

“Zoe really wanted it to be hand-held, so the actors had space and a chance to roam,” she added.  “We’re in their home and a part of their world.”

That naturalism was further refined during grading sessions at Technicolor PostWorks. “The film has a soft, filmic vibe,” said Ames. “It’s very Southern California: beautiful skin tones, golden light, slightly lifted blacks. It’s lush. Hillary did a beautiful job. The material looked wonderful coming out of the camera, so it was fun to play with.”

Spera says the grading sessions were very collaborative. She and Ames quickly developed a rapport and reacted similarly to the material. “Allie understood where we wanted to go from our initial talk,” Spera recalled. “We shot with two cameras and vintage lenses, so there was a lot to do in color to make it uniform. Mostly, we wanted to be subtle with color, and Allie got that, but at times we needed to go for more color or a stylized look, and she got that too. It’s hard to make the color feel organic with natural light, and Allie really achieved that beautifully.”

As an example of the latter, Spera points to a montage of nightclub scenes where lighting was used to distinguish different performances. “There are a lot of color shifts, and we worked to make each one feel different,” she said. “We went through that sequence with a fine-toothed comb because it really needed to say something narratively.”

Both Spera and Ames said that they found it inspiring to work on a project driven by women. “Zoe had the vision to hire an all-woman crew, but once we crewed up, it felt like any other project, except in its spirit of collaboration,” Spera said. “Everyone’s voice and ideas were considered and we worked together like a well-oiled machine. At every turn, it was the best it could be.”

“Camera, electrical, sound and editorial…they were all women,” added Ames. “I’ve had the benefit of working with amazing women directors before, but this was unique and very exciting. It was a real girl power show.”