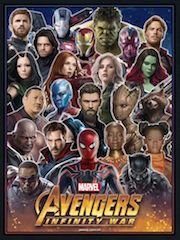 According to CJ 4DPlex, the new film Marvel Studios’ Avengers: Infinity War has been seen in the 4DX immersive seating format by more than two million people across 59 countries. This breaks the record for highest-attendance 4DX film to date. The milestone also makes Avengers: Infinity War the most successful film released in the format, surpassing the previous record holder, 2015’s Star Wars: The Force Awakens.

Released in the 4DX format that features seat movements, vibrations and environmental effects tailored for each key aspect of the film, Avengers: Infinity War is the first 4DX title in history to reach the two million attendee mark and the fourth 4DX title released in the past six months to pass one million. This includes Marvel Studios’ Black Panther and Lucasfilm’s Star Wars: The Last Jedi.

“With their spectacular action sequences, these films are perfectly suited to be converted into 4DX,” said Byung-Hwan Choi, CEO of CJ 4DPlex. “We are excited each time we team with Marvel Studios and look forward to even more moviegoers around the world being able to experience Avengers: Infinity War in the fastest-growing premium movie format - whether fans are seeing the film for the first time or going back to the theatre for repeat viewings.”

In April, 4DX announced the opening of its 500th theatre in Paris, France. There are now more than 62,000 4DX seats in 524 auditoriums in 59 countries, which can accommodate more than 110 million domestic and international audiences annually.