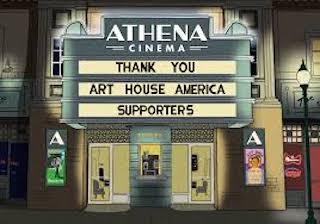 The Athena Cinema in Athens, Ohio, has introduced a new film series focused on providing an accessible theatre experience for visitors that features screenings of contemporary independent films. Each Saturday in September, the theatre will feature a limited one-time-only screening of a contemporary art film. In addition to showcasing independent films, the Athena Cinema will create events that are inclusive for all, including for individuals who find traditional films screenings uncomfortable or inaccessible due to the atmosphere.

These screenings will support filmgoers with open captions displayed on the screen and maintain a sensory friendly environment. Screenings known as sensory friendly or sensitive, adjust lighting and sound levels to create a comfortable atmosphere for all patrons, including those on the autism spectrum.

The Athena Cinema director Alexandra Kamody said by creating more theatrical experiences built around the ideal of an accessible film and theatre-going experience, the cinema is showing its support for people of all abilities.

“The thing we know about open captions is that it is a better experience for many people,” Kamody said. “Not only for those who are deaf, hard of hearing or hearing impaired, but also for individuals who are non-native English speakers, senior citizens and people on the autism spectrum.”

While the Athena offers Captiview captioning devices for closed captions, many individuals have had negative experiences with the devices that are prone to technical problems. Unfortunately, cinemas still can’t depend on film distributors to provide open caption technology for all films and must request specific files for each film to be able to offer the open captions technology.

By planning in advance, the programming of films that offer open captions, the theatre is able to guarantee an inclusive experience.

While some films deal directly with issues concerning accessibility, Kamody explains that the programming wasn’t originally planned to reflect on the topic of accessibility.

“We find a lot of sensory-friendly screenings are planned with children in mind, which is great, but we wanted to offer something different here,” Kamody said. “While booking films, a theme emerged, and we found all the films touched on the topic of accessibility in some way. It was quite beautiful to look at this collection of films and say, ‘What does accessibility mean in a broader sense?’ For some it might be a chance to be heard, for others it might be a chance to be seen.”

The Athena Cinema’s Accessible for All Film Series began September 11 with the Sound of Metal. That will be followed on September 18 with Swan Song in which actor Udo Kier stars as retired hairdresser Pat Pitsenbarger, who escapes the confines of his small-town Sandusky, Ohio nursing home after learning of his former client's dying wish for him to style her final hairdo.

The series will end on September 25 with Ailey, the story of Alvin Ailey, a trailblazing pioneer who found salvation through dance. Ailey traces the full contours of this brilliant and enigmatic man whose search for the truth in movement resulted in enduring choreography that centers on the Black American experience with grace, strength, and unparalleled beauty.

The Athena Cinema partnered with the Ohio’s Performing Art & Film Series, Ohio's Student Accessibility Services, Athens County Board of Developmental Disabilities, and the Athens City Commission on Disabilities for this series.

Accessible for All at the Athena Cinema is made possible in part by state tax dollars allocated by the Ohio Legislature to the Ohio Arts Council. The OAC is a state agency that funds and supports quality arts experiences to strengthen Ohio communities culturally, educationally, and economically. The Athena Cinema is an auxiliary unit within Ohio University’s College of Fine Arts. It is a nonprofit cultural institution dedicated to creating a wide array of film-going experiences.