As a growing number of film producers embrace the idea of virtual production, Arri has established the Arri Solutions Group, which is focused on the design and engineering of customized production infrastructures, including innovative mixed-reality environments, and other ultra-modern solutions. One of the group’s first mixed reality reference projects is the recently operational Dark Bay Virtual Production Studio in Babelsberg near Berlin.

At one of Europe's largest permanent LED studio for virtual film productions, the Arri Solutions Group was responsible for the overall technical planning as well as the coordination of the installation of all components. For this project, Arri’s three business units—Camera Systems, Lighting, Rental—worked together intensively under the project management and coordination of the Arri Solutions Group.

Currently, filming is taking place in the Dark Bay for the Netflix production 1899, the new series from Jantje Friese and Baran bo Odar. The actors are being filmed in front of a 55 meter-long and 7 meter-high, bent at 270°, LED wall with the Arri Alexa Mini LF camera and Arri Rental lenses, created exclusively for 1899. The LED wall is complemented by 70 SkyPanels from Arri, combining to interactively illuminate the volume.

The original series revolves around a migrant steamship heading west to leave the old continent from London to New York. The passengers, a mixed bag of European origins, are united by their hopes and dreams for the new century and their future abroad. When they discover another migrant ship adrift on open sea, their journey takes an unexpected turn. What they find on board will turn their passage to the promised land into a horrifying nightmare. 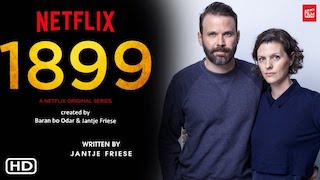 “In spring 2021, we built our high-end LED studio in a record time of three months on the premises Studio Babelsberg AG,” said Philipp Klausing, managing director of Dark Bay GmbH and producer of 1899. “The team from the Arri Solutions Group, one of the few vertically integrated service providers with a spectrum of knowledge that spans LED, light, camera, and data technology, was commissioned with the overall planning. The balanced inclusion of the needs from the specialist departments of direction, camera, lighting, and VFX were indispensable for us to guarantee a satisfactory recording result in the studio. The high level of bundling competence that the Arri Group offers in its entirety was a main factor in guaranteeing the studio be assembled and delivered in this quality.”

With the establishment of global technology partnerships and regional mixed reality testing environments, Arri is driving the development of innovative products, workflows, and solutions forward. In Uxbridge, near London, Arri and Arri Rental will open a mixed reality studio in June 2021 that will be used for commercial and demonstration purposes. Additional test and demo stages are operated by Arri in Burbank, near Los Angeles, as well as in Munich. More mixed reality studio projects are in the pipeline. As a shareholder of Volucap, the first volumetric studio on the European mainland in Babelsberg, Arri has worked on the further development of recording techniques for virtual reality and augmented reality since the studio’s opening in 2018.

“Arri has long since ceased to be solely a hardware manufacturer,” said Stephan Schenk, Arri’s general manager global sales & solutions. “Whether consulting, configuration, or turnkey installation: The experts of the Arri Solutions Group design precisely the solutions our cine and broadcast clients need. Thereby, coordination and good cooperation with companies offering other products and services are also very important to us.”