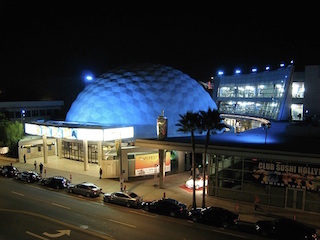 ArcLight Cinemas has collaborated with Christie to custom fit the legendary Cinerama Dome in order to properly project the west-coast debut of Academy-award winning director Ang Lee’s Billy Lynn’s Long Halftime Walk in 3D 4K 120 frames-per-seconds, the way it was shot. The debut will be held November 10.

“A year ago we stunned and delighted our guests with the laser-projection viewing experience of Star Wars: The Force Awakens, at the Cinerama Dome, remaining true to our position as an iconic cinema stop in Hollywood,” said Gretchen McCourt, executive vice president, ArcLight Cinemas. “Now, we’ve upped the ante with the addition of the unique Christie Mirage system to be the only west coast theatre to show Billy Lynn’s Long Halftime Walk exactly as Lee shot and cut the film remaining faithful to his story-telling vision. We’re honored and thrilled to give ArcLight guests the opportunity to see Billy Lynn in 120fps, exactly how Lee intended.”

For Billy Lynn’s Long Halftime Walk, Lee decided to push cinema’s technological boundaries, to immerse patrons in a totally realistic experience that conveyed like no other the reality and emotional journey of soldiers. He did this by shooting it at 120 frames per second per eye. It is the first ever feature film to be shot in such a high frame rate – more than twice that of Peter Jackson’s The Hobbit: An Unexpected Journey, at 48 fps per eye– and five times the standard speed of 24 fps per eye. Of more than 150,000 digital cinemas worldwide, Cinerama Dome is one of only a half-dozen that can project the film in 3D, at a 4K resolution and at 120 fps per eye, courtesy of the Christie Mirage system.

The Cinerama Dome was upgraded with a dual-head, Christie 6P laser projection setup in December 2015. Not only is it still projecting more than double the light of an average 3D projection system, it has added the special Mirage lens-gear and the Christie TruLife electronics platform to deliver 120 fps per eye at the color saturation and detail of 4K resolution. That platform has an industry-leading video-processing pipeline capable of processing up to 1.2 Gigapixels per second of movie data. This enables guests to view the finest details of the film, no matter how fast the action is.

“Once again the iconic Cinerama Dome has pushed the technological boundaries of movie presentations, with the addition of Christie Mirage technology to its 2015 installation of the groundbreaking Christie 6-Primary (6P) dual-head laser projection system,” said Susie Beiersdorf, vice president, cinema sales, Americas for Christie.  “It’s a pleasure working with the prescient staff at ArcLight, and building on our decade-long relationship that has seen Christie install scores of projectors in the chain’s theaters throughout the United States.”