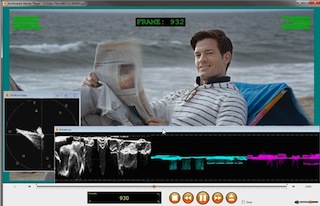 Archimedia Technology today released Archimedia QuSee Suite, a family of tools to inspect and measure video, audio, and metadata for broadcast, post-production, A/V, mastering, and distribution. Working in tandem with the Archimedia Master Player, the Archimedia QuSee Suite brings validation and verification functions to the desktop, allowing users to perform quality tests on actual files rather than on processed SDI streams created from those files.

"We designed the Archimedia Master Player to be used by nontechnical people, but with powerful tools under the hood so that when they need technical assistance, everything is there. Now we've applied that same 'powerful-but-easy-to-use' philosophy to A/V measurement," said Mark Gray, Archimedia president and CEO. "The desktop QuSee Suite replaces expensive SDI infrastructure that requires special knowledge to set up, maintain, and use. Moving traditional SDI measuring tools onto the desktop with the Master Player not only lowers the cost of ownership and operation, but also lets users measure the actual files as they are rather than an SDI stream interpretation of them."

The Archimedia QuSee Suite replaces aging SDI hardware such as video and audio waveform monitors, vectorscopes, and audio phase meters, as well as their desktop counterparts, which don't come with a player that supports all of the common professional mastering formats as Archimedia Master Player does.

The Archimedia QuSee Suite contains a traditional video waveform monitor and vectorscope in a desktop floating window, with support for SD, HD, UHD, and 4K video sizes; standards-based frame rates; and all professional video formats including broadcast, cinema, and Web. This combination of features enables per-pixel measurement using a simple mouse, and accommodates many new and emerging formats for Internet video that were never intended for SDI anyway. For audio, a traditional audio waveform monitor and phase meters appear in a desktop floating window. The audio tools support uncompressed PCM and compressed audio formats including Dolby. One benefit of integrating desktop validation and verification with the Archimedia Master Player is the player's unique ability to keep compressed video and compressed audio in perfect sync, even in fast forward, rewind, and slow-motion modes — an important factor in all kinds of media work.

"QuSee Suite was designed to overcome many of the limitations of SDI-based monitoring. For example, SDI is cumbersome for 4K/UHD and not always relevant to the format being measured," Gray said. "Our roadmap calls for QuSee Suite plug-ins that will solve a number of workflow problems, as indicated by their names — Wrap2MXF, SaveAsUncompressed, etc."

The first plug-ins available in the suite, Wrap2MXF and SaveAsUncompressed, let users send any media file that Archimedia Master Player can decode (which is just about all of them) to their own transcoder, editor, or other tool. Users preselect all or part of a media file and mark in/out points, and SaveAsUncompressed delivers a lossless extraction to uncompressed video, PCM audio, and SAMI or SRT subtitles. From there users feed the result to their own tools for the best possible import or transcode. Wrap2MXF conforms many formats into the user's chosen SMPTE standard MXF OP1a and AMWA profiles like AS-02, AS-03, and AS-11.