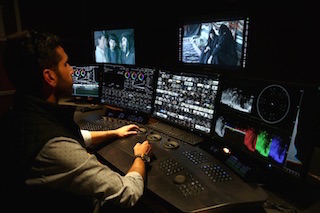 Arab Telemedia Productions, an Arab Telemedia Group subsidiary, has been producing high quality television for the Arabian market for the past 30 years. In 2008 it won the first ever Emmy for a foreign telenovela, Al Ijtiyah (The Invasion). The company handles all aspects of a show’s creation, from idea development, production to post and final delivery.

To boost the quality of the imagery and to speed delivery, Arab Telemedia has now installed a comprehensive color management workflow from FilmLight. This starts with four FLIP units for on-set pre-visualization, each capable of handling four input channels. Where drama productions regularly use the same set, this is a very efficient way of creating a strong look at the point of acquisition, by adding color correction to the output of each camera.

FLIP is part of the Baselight environment, so the color grades imposed on set are not burnt in, but stored as metadata in FilmLight’s Baselight Linked Grade file format - the essential component in enabling looks to be exchanged between all FilmLight systems. The BLG enhanced format contains all grade information, even Truelight cubes, conform metadata and keyframes, and can be passed to the Baselight TWO color grading workstations in post-production where the final grade is finessed.

As well as the FLIP on-set look management system, Arab Telemedia also uses five Daylight systems for on-set dailies and high-performance transcoding. The color grade from the FLIP can be further refined and rendered at this point, but more commonly the BLG metadata is attached to each shot, and the grade is imposed in real time using several Baselight Editions for Avid - a software plug-in which resides in the Avid edit workstations and completes the workflow. In addition, with the new free-to-read capability in Baselight for Avid, which is now available and means that grades can be read accurately without purchasing a license, last minute grade changes can be provided in an updated AAF to any Media Composer system without rendering or licensing.

The ability to exchange the onset grades as BLGs with the editorial department, then pass them to the grading suite, ensures the DP’s intent is displayed consistently throughout the post process. The editor always sees the latest grade during the edit and can also make adjustments where necessary. It makes the final grade a much easier and shorter process.

“We first used this set-up on Waed Al Ghareeb (The Promise),” said Talal Awamleh, CEO of Arab Telemedia Group. “This is a high-value, high-profile 30 part episodic and we wanted it to have great production quality, even in a tight timescale. We talked to the FilmLight team at IBC in 2014 and realized that the renderless, metadata-driven color environment they had built using Baselight tools and the BLG workflow had huge potential.”

“At that time we were making a huge investment in Avid technology, so the fact that Baselight Editions could add color grading to the edit stations was a significant benefit,” he explained. “It means we can see precisely what the finished product is going to look like, at any point from the set to the finishing suite. Producers are reassured and we know we are getting the best possible quality, quickly and economically, because we have a color pipeline that is without equal in the Middle East.”

Arab Telemedia is currently producing two high-end drama series, Malik bin Al Rayeb and Rakan Bin Hithleen. The TV series will be aired during the next Ramadan (June – July 2016) and are utilising the same FilmLight and Avid workflow.

Mark Burton, sales director at FilmLight added, “High pressure drama production is being transformed by the Baselight collaborative workflow. Scenes that appear regularly will always look the same because standard looks can be developed and repeated, so everyone in production gets to work with the latest grade – meaning there are no compromises in post and the creative intent remains. Additionally, because we are only building metadata, there is no waiting for renders or for large files to be transferred again and again.

“The result is that everyone, from the DP on set to the editors and the final colorist, can concentrate on getting the very best out of the material without any restrictions on the creative process,” Burton said. “All that means a better program, delivered faster.”