Ant-Man and The Wasp Releasing in ScreenX 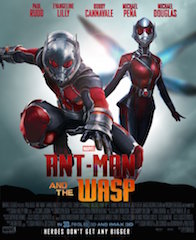 “Watching Black Panther move through Wakanda and Busan in the panoramic format was a thrilling experience,” said Victoria Alonso, executive vice president, physical production, Marvel Studios, “and we are excited to see Ant-Man and The Wasp magnified in this transformative, bigger-than-life format for audiences.”

“The innovative and immersive environment created by ScreenX is truly amazing and a wonderful way to enjoy a film like Ant-Man and The Wasp,” said Jeff Forman, senior vice president, international theatrical sales, The Walt Disney Studios. “We look forward to fans being able to connect and experience the film in ways they have never imagined.”

“Disney and Marvel Studios continue to be a pleasure to work with, as we collectively look towards the future of cinema by making innovative experiences available to movie fans around the world,” said Byung-Hwan Choi, CEO of CJ 4DPlex. “Building on Black Panther’s success in ScreenX, we expect great things this summer with Ant-Man and The Wasp taking on our multi-projection, panoramic technology.”