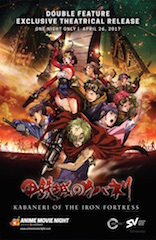 Crunchyroll has announced that the first-ever Anime Movie Night will take place on April 26 in more than 200 theaters nationwide. The quarterly anime cinema programs are made possible through Crunchyroll’s alliance with Screenvision Media, in association with event cinema creators Kaos Connect.

As the first event in the Anime Movie Night series, the April 26 screening will include a double feature showing of two never-before-seen feature-length films, Light that Gathers and Life that Burns, which consolidate content from Kabaneri of the Iron Fortress, the post-apocalyptic hit series that premiered in spring 2016 on Fuji TV. Kabaneri of the Iron Fortress is by Wit Studio, the animation studio that produced the wildly popular anime adaptation of the Attack on Titan manga series. These films will include updates and enhanced footage different from the original TV series. Special intros to both films will be included with this event.

“Crunchyroll is always looking for ways to take anime to new heights and to better serve its passionate community. With Anime Movie Night, Crunchyroll can now take anime out of the living room and onto the big screen to reach more viewers with a heightened experience. What’s more, the theatrical release of Kabaneri of the Iron Fortress gives fans an opportunity to come together to celebrate a favorite title at theaters across the country,” said Kun Gao, general manager of Crunchyroll.

With theaters participating across major metropolitan areas in the U.S., life-size anime has never been more accessible. The one-day event will be hosted by most major theater chains. More participating theaters are being added in the weeks leading up to the event, and fans are encouraged to check the Anime Movie Night website to find their closest location.

“Event Cinema is all about connecting passionate fans to their favorite content through high-quality viewing experiences. Together with Crunchyroll we can optimize the exclusive theatrical event to provide the most compelling anime experience for loyal fans and newcomers alike,” said Dan Diamond and Shelly Maxwell, Kaos Connect's managing partners.

Kabaneri will kick off the first of quarterly Anime Movie Night events throughout the year showcasing popular titles. Each will feature select anime episodes or full-length theatrical releases, either classic or new.