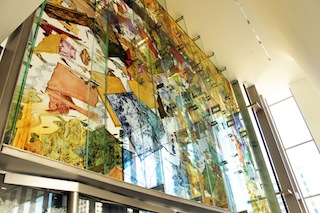 Renowned artist Clifford Ross incorporated Maxon Cinema 4D software technology in the design process of The Austin Wall, a monumental and unprecedented stained glass work housed at the new United States Courthouse in Austin, Texas. Integrated into the architecture of the new courthouse, the wall stands approximately 28 feet wide by 28 feet high and weighs about 5,840 pounds. It was unveiled last month.

Ross and the animation team at the Clifford Ross Studio in New York City used Cinema 4D for several years before the Austin project because of its flexibility in creating immersive short and long-form 3D animation studies, which the artist based on his high-resolution photographs of Mount Sopris in Colorado. An evolving artistic series entitled Harmonium Mountain, Ross’ exploration with the software led to the development of a method for creating high resolution prints up to 16-feet wide originating from a single frame of Cinema 4D animation.

The Austin Wall work comprises an upper and lower part, with the lower a more realistic representation of Ross’ work, and functions as pair of revolving glass doors. The upper is more abstract and was inspired by Ross’ desire to create complex still images from a small detail of one of his high-resolution Harmonium Mountain photographs. These images drew on 3D imagery previously generated using Cinema 4D that were taken from the studio’s extensive library of renderings and animations. The result is a dramatic abstract composition made up largely of rectangles evoking naturalistic movement and occurrences in nature that unfold over time. Some images even move beyond the natural, entering into more dreamlike and magical realms that reveal colors and textures of sky, water, earth and foliage.

For Ross, Cinema 4D imagery was as an organic part of his work method and instrumental to creating the complex abstract imagery seen on the upper part of the wall. “We built a fully realized 3D world using many aspects of nature such as wind, gravity and water flow, as well as the colorful abstract Harmonium elements,” Ross says. “From there we could place the digital camera in Cinema 4D anywhere and watch the of procedural computer animation take shape in front of our eyes to see how the imagery developed through time.”

He adds, “Nature moves and it is complex. Those two facts are central to why Cinema 4D was useful in my creative process. It has given me a tool to push my expressive powers with color, shapes and motion in ways that are uniquely 21st-century, but also marry a thousand-year-old craft into a seamless continuum to create this large scale work of public art for the City of Austin, the General Services Administration and the Federal Judiciary.”

The challenge for Liron Unreich, animation director at Clifford Ross Studio, was to give Ross the tools he needed to create a digital world consistent with his vision and understanding of the natural world and to translate it into his particular form of modern abstraction.

“It became clear that converting The Austin Wall animation frames to digital stills required a resolution substantially greater than anything we could have anticipated in order to maintain a consistent look for the very detailed textures and large variety of particle sizes of the stained glass design,” Unreich explains. “As an alternative to storyboarding and blocking for the camera, we relied on the MoGraph and Xpresso toolsets in Cinema 4D to give us incredible control over many different elements. We were building ‘natural’ particle environments that live, grow and die in procedural animation. The software also gave us the capabilities to cache and bake frames – often requiring seven layers of multi-pass work using full frame images of 24000x35000 pixels – to achieve the ultra-high resolution quality necessary.”

“For years we have been working with Clifford Ross and his creative team to seamlessly integrate Cinema 4D into their production pipeline and meet the incredibly complex challenges of the Harmonium Mountain project,” Paul Babb, president/CEO, Maxon US says. “As an artist Clifford constantly pushes the boundaries of our software, and we could not be more pleased that his high-impact creative experience has generated such stunning and original results on the Austin Wall public art project.”

For more information on Clifford Ross and The Austin Wall http://www.cliffordross.com