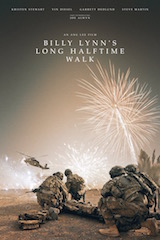 New York Film Festival director and selection committee chair Kent Jones said, "Billy Lynn's Long Halftime Walk astonished me, and it moved me deeply, in the grandest way, as a story of America in the years after the invasion of Iraq, and on the most intimate person-to-person wavelength. Ang Lee has always gone deep into the nuances of the emotions between his characters, and that's exactly what drove him to push cinema technology to new levels. It's all about the faces, the smallest emotional shifts. In every way, Billy Lynn is the work of a master."

Billy Lynn is also a giant step forward in the art of cinema, made with a cinematographic process years ahead of its time. The film, from TriStar Pictures and Studio 8 in association with LStar Capital, Film4, Bona Film Group, and Fosun Media, is the first full-length narrative film shot in 4K, native 3D at the ultra high rate of 120 frames-per-second. The NYFF event will be the first time ever the format will be screened publicly. Creating the film in this immersive format required technical invention at each stage of the process—prep, shooting, and post-production. The commercial run of the film will play in a variety of 2D and 3D formats, all of which display the new techniques with which the film was made.

Lee's stunning adaptation of Ben Fountain's novel is the story of an Iraq war hero (newcomer Joe Alwyn) who comes home with his fellow members of Bravo Company for a victory tour. This culminates in a halftime show at a Thanksgiving Day football game—a high-intensity media extravaganza summoning memories of the trauma of losing his beloved sergeant in a firefight.

Lee's brave, heartbreaking film goes right to the heart of a great division that haunts this country: between the ideal image of things as they should be and the ongoing reality of things as they are. With a brilliant supporting cast, including Kristen Stewart, Chris Tucker, Garrett Hedlund with Vin Diesel and Steve Martin.

“With each film, I try to learn fresh ways to connect with the audience and with myself. Since Life of Pi, I have been working with my team towards a new cinematic approach that I hope will revitalize that connection. But technology is merely a tool; it should always be in service of artistic expression, to make it strong and fresh, because story and drama matter most. I thought Billy's journey, which is both intimate and epic, and told almost entirely from his point of view, lent itself particularly well to the emotion and intensity that this new approach fosters. At least I hope so, as many people have worked long and hard to help me try to make the future a reality today. I am thankful to them all."

Lee has a long history with the festival. Most recently, his Oscar-winning Life of Pi was Opening Night of NYFF50 in 2012. His 1997 film The Ice Storm opened NYFF35, and Crouching Tiger, Hidden Dragon was Closing Night of the 38th festival in 2000.

Directed by Ang Lee and produced by Marc Platt, Ang Lee, Rhodri Thomas, and Stephen Cornwell, Billy Lynn's Long Halftime Walk is based on the widely acclaimed, best-selling novel by Ben Fountain, with a screenplay by Jean-Christophe Castelli.

The complete lineup of Special Events at the 54th New York Film Festival will be announced in the coming days. NYFF previously announced Ava DuVernay's documentary The 13th as the opening night selection, Mike Mills's 20th Century Women as Centerpiece, and James Gray's The Lost City of Z as closing night. The complete main slate lineup can be found here, along with the complete programs for Convergence, Revivals, and Projections.

Tickets for the 54th New York Film Festival will go on sale September 11. Becoming a Film Society Member at the Film Buff Level or above provides early ticket access to festival screenings and events ahead of the general public, along with the exclusive member ticket discount. Learn more at filmlinc.org/membership.