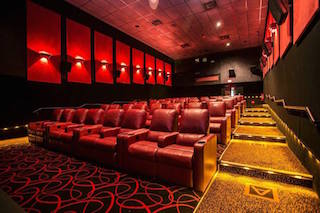 “Guests should prepare to be blown away when we launch this amazing theatre experience,” said Gerry Lopez, CEO and president, AMC. “Moviegoers are already demonstrating they’ll drive past other theatres to see a movie in AMC Prime, so combined with Dolby’s pioneering technology, this next-generation Premium Large Format experience will leave them impressed, thrilled, and excited by what they see, hear, and feel—all from the comfort of their reclining chairs.”

The Dolby Vision laser projection system delivers high dynamic range with enhanced color technology that produces incredible blacks and a contrast ratio that far exceeds any other image technology on the market today. The result is a richer, more detailed viewing experience that delivers strikingly vivid and realistic images that make audiences feel like they are in the movie’s world. Dolby Atmos, the award-winning Dolby sound technology, moves audio around the theatre, even overhead, with amazing richness and depth. The lifelike sounds of music, people, and things flow all around the theatre in sync with the action to create a more immersive and moving experience.

The inspiration for the design elements came out of the desire to achieve technically superior sight and sound capabilities for all Dolby Cinema at AMC Prime locations. The design of the cinema itself has been created to set a mood and draw audiences deeper into the story. Through the Dolby technology, combined with the ultimate comfort and experience of the AMC Prime plush recliners with seat transducers, guests will feel closer than ever to the action on screen.